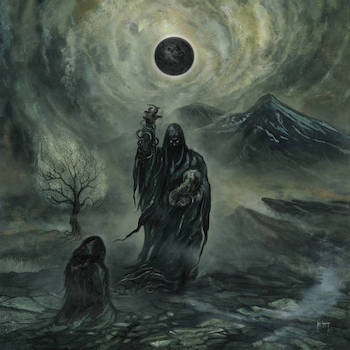 Uada are a band that has made their impression in American black metal and with their sophomore album the band successfully proves that they are more than just another melodic black metal band and have not just the potential but the capacity to be great.

Cult of the Dying Sun sees the band completely reinventing themselves in the best possible way, everything that made their first album good is exponentially improved and expanded and with this album Uada have successfully found their own voice and style. For this album, the complex and layered musical compositions have gone from the first album's streamlined approach into much more dynamic and even atmospheric routes. The songs are longer and feature stronger performances altogether, the bass and drums which weren't as good as the dual guitars are much more prominent here, which is clear given the band had a lineup shakeup in those departments and the results speak for themselves. The bass is much more forceful and does a better job at complementing the guitars while also standing out on its own, the drumming is more aggressive and even technical than before, going from crushing blast beats into complex rhythms and in keeping the radical changes of pace in the songs. All that is complemented by the excellent dual guitar work of Sloan and Superchi, their guitar work has been improved exponentially, their sorrowful harmonies and aggressive speed are complemented by the much more layered melodies and riffing there are times where their guitar work gets into later era Death levels of complex and it creates an excellent sound and all of the performances are held together and carried by Superchi’s vocals which again are excellent and he is able to flex his vocal chords in all ways, everything is here, shrieks, howls, growls and more, Superchi is easily one of the most dynamic vocalists in metal right now and this album is proof of that.

Furthermore, the band also build upon their uniform performances from the first album. Once again there's a strong sense of unity in all the instruments, there isn't a single bad performance and this unity is what creates the much darker and chaotic atmosphere that the band went for with this album as opposed to the somber aggression of their previous one. Also building from that original foundation the album is a cohesive whole. Not an ounce of filler to be found here and even on their bolder experiments like the excellent instrumental track "The Wanderer" which dips into dark ambient music which are peppered throughout the album succeeded perfectly and managed to create an album that from front to back is a complete experience.

The production is also a significant improvement here, the band managed to acquire a better studio and the result sounds great; it also manages to reach that perfect sweet spot of being polished but not to its detriment, the raw grit of the band's performance is not lost in the mix and the album is all the better for it.

Overall, Uada were able to successfully iron out all the shortcomings of their previous record and are on the right path into greatness, this album is a complete triumph.