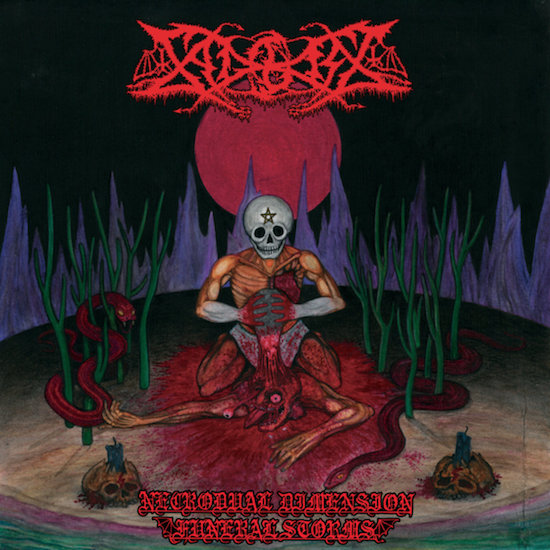 Hell's Headbangers again. Well, it can't get worse than Abysmal Lord, even though the artwork of Necrodual Dimension Funeral Storms, what a title, insults the eye of any beholder with a minimum of esthetical perception. Who paints such an infantile shit and why? Okay, no need to clarify this, let's turn to the music as fast as possible.

This Finnish trio with resounding names like Sagittariuz Perverzor or Vorrtexx Armageddon unleashes a sometimes chaotic, sometimes more or less structured whirlwind of extreme music with prevailing elements of black metal. The nagging of the lead vocalist, for instance, is influenced by the vocal performances on albums such as "Under a Funeral Moon". By contrast, thrashing riffs almost do not show up and we can ignore some war metal elements. But Sadokist add a very vulgar component to their sound and this is sometimes pretty annoying, because they should have focused on more intelligently designed song patterns. The same goes for the guitar leads. Some of them are overly simple, just listen to "Enter the Devil" or "Driven by Disgust" and they sound pretty amateurish. However, there is enough structure to guide the listener through the apocalyptic wasteland.

Despite some competently executed breaks, an album with such a narrow-minded stylistic frame naturally lacks variety and it has not that much in common with most people understand of music. So what? The guys from Northern Europe do their own thing without taking care of the opinion of other dudes. They even surprise with an "epic" piece at the end. "Orgy ov Crime" clocks in after five minutes and offers a reasonable mix of pretty or even extremely fast sequences and a nearly moshing mid-tempo part. The solos are also well integrated. Nevertheless, this album does not enter my private hall of fame. Many songs do not exceed an average level and the running time of less than 30 minutes is hardly evidence of creativity. Moreover, there is another thing that annoys me. The guitars lack heaviness, their basic tone sounds mean, but not voluminous or mighty. The short solos that appear every now and then are okay, they are well embedded and have an alarming effect, but the remaining guitar sound does not meet my expectations. There are more strange sound elements, for example some almost atmospheric tones at the end of "Enter the Devil". I have no clue why the band thought it could make sense to add these somewhat howling sounds to this more or less bestial feast of pure violence. These tones remain a foreign body here.

I could go on with describing the lyrics of promising titles like "Planet of Shit" or "I Will F**k Tonight", but honestly speaking, their philosophical value is probably rather small. So, let's bring it to an end. Sadokist score with verve and conviction, but their music and the production suffer from a lack of intensity, coherence and class. Only recommendable for people who love extreme experiments of average quality.