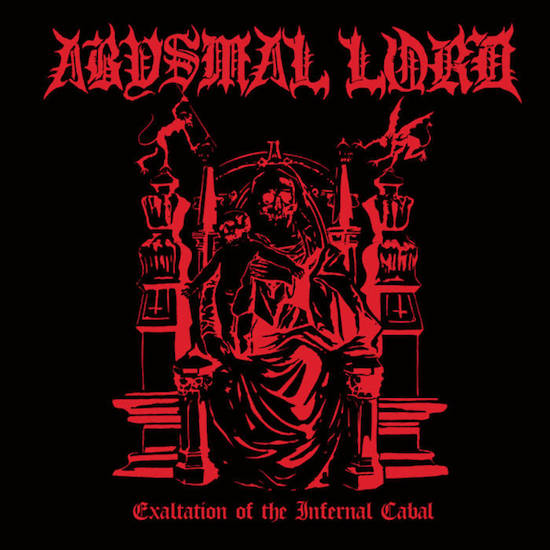 How many amateurs play extreme metal? One thing is for sure, the number is too high. Abysmal Lord, protégés of Hell's Headbangers, spit out some pieces full of disgust, hatred and scorn, but I cannot identify any trace elements of music. It's more or less a constant noise, poorly produced and without comprehensible structures.

It does not matter what you want me to analyse, the result is always the same, as much as I regret it. The solos, for example, are pure noise, without any connection to the rest of the so-called songs. Dudes, that does not make sense. The voice suffers from an overdose of reverb and the same applies for the drums. They sound anything but natural and the speedy rhythms seem to be performed for the sake of themselves. I come to this conclusion in view of the horrible guitar work. The totally undifferentiated six strings do not pick up the velocity of the drums. They only deliver a permanent humming, if we neglect the electronically yapping of the solo excursions.

Needless to say that all songs sound the same. Only a few numbers of (irony mode on) extremely horrifying (irony mode off) intros marches to a different drummer. Maybe this is a legitimate form of metal, surely it is, but it has nothing in common with my understanding of music and especially live concerts of these noisy clowns are probably an inhumane torture. By the way, has one of you ever been on a concert of the Ramones? I saw them and I was slightly disappointed, because even though the single songs were classics, the performance suffered from a total lack of dynamic. The first song was fast, the second song was fast and so on, Joey Ramone did not much communicate with the audience and so roughly 25 songs just passed by. On this album, the symptom reappears with the little difference, that each and every song sucks.

34 minutes can be very long, and it is only cold comfort that every tone of the rumbling drum brings us nearer to the end. Bestiality is written all over the cacophonous scenario, and, as mentioned before, the anti-musicians pull out all the stops in order to create the most barbaric album of the year. Their mission is clear, but the idiocy of their aim is evident as well. Enthusiasm for the wrong goals means nothing else but destruction of values and here the extreme metal scene is affected. This album is grist to the mill for all those scatterbrains that always blame extreme metal for being pure noise. I wish I could find at least a few numbers of solid parts, but nothing keeps sticking in my mind and nothing makes me prick up my ears. This must be the goddamned parody of a black death metal album. At best, the dudes were willing but not able... so I recommend this album to all those who hate each and every album I gave 10.

If you have been following the bestial black death metal scene or even underground death metal in the United States since probably 2011, then chances are you have in one way or another encountered Abysmal Lord. I say that because the original members of the band are also that of Grave Ritual; a death metal project that has put out two well received albums, and word of a follow up to 2015’s "Morbid Throne" has been ongoing for a while now. Disciples of the Inferno followed after having released a debut demo in 2013 and a promising EP in 2014. As one would imagine being a bestial black/death metal band their imagery and sound was subject to change in adapting to the different frontier of extreme metal; where Grave Ritual was more focused on traditional death metal song structures and vocals, Abysmal Lord would channel an even more unrestrained type of power, this time utilizing their more primordial and raw soundscapes to carry out their unholy agenda. Disciples of the Inferno appealed to many within the bestial black/death metal realms and was met with massive success with the record (vinyl format) being sold out rather quickly upon release through Hells Headbangers. When hearing that offering, it immediately stood out to me as being very ill-tempered and impulsive, an oppressive aura of purposeful rage and savagery accompanied the recordings as though being a musical manifestation by an indigenous and even more hostile clan of life forms, alien to earth and the pitiful philosophies governing it.

The season of bestiality is upon us, and to satisfy our high anticipation, yet another original recording is set to be released by Abysmal Lord; their sophomore album Exaltation of the Infernal Cabal through Hells Headbangers. This latest ceremony of slaughter treads the same path set before; Exaltation of the Infernal Cabal brings the axe of justice as was the case on Disciples of the Inferno; however, this butchery is met with a bassier production that I felt the prior full-length record could have benefited from. The pulverizing pulse of the drums and bass work in unison; whilst ravenous vocals and untamed guitar riffs achieve sonic barbarity. Exaltation of the Infernal Cabal is a 1+ to Disciples of the Inferno, it’s an impressive feat to accomplish considering the members also play death metal and have had to activate their more draconian tactics in order to create what is being heard here. Amidst the rumbling chaos comes a controlled technical component that does not thwart the core elements of Abysmal Lord’s instrumentation. Rather; it creates a passage of sorts that expands the breadth of the recordings as can be heard on ‘Monolith of Vengeance’, ‘Scythe of Damnation’ and ‘Nuclear Absolution’. These tracks among others, still manifest with shredded cloth for clothing where the music is concerned; but with it, also comes a prevailing gleam of serpentine and at times recondite purpose. Like a living-body appearing insane from an untrained peripheral, but under microscopic examination, is comprised of intricate and inscrutable mechanisms of reason operating at its philosophical nucleus.

On Exaltation of the Infernal Cabal, Abysmal Lord's approach in general could be compared to some of the more revered in the genre, the likeness of Diocletian and Conqueror come to mind when hearing the material on this and past albums they have created. The production although being thick and louder this time, which are both welcome attributes, still returns with that sharp edged treble more prevalent on 2015’s Disciples of the Inferno. Exaltation of the Infernal Cabal comes 4 years since their debut full length release, and it is in that gap of time the band had been cultivating their music. Hence, the listener is made aware of the progress the unit has made when comparing the current entry to their last. As a taste of what was yet to come, a split with Crurifragium (an excellent bestial black/death metal band) was recorded in which 2 tracks were laid before the altar by Abysmal Lord, and immediately I detected how much more of an improvement was made since their debut. Thus, it is more than evident that progress has carried over onto their latest entry, Exaltation of the Infernal Cabal. I can only imagine this will sell just as fast as 2015s effort or even faster, but there should be no procrastination about getting Exaltation of the Infernal Cabal if you enjoy this format of extreme metal and can afford it.