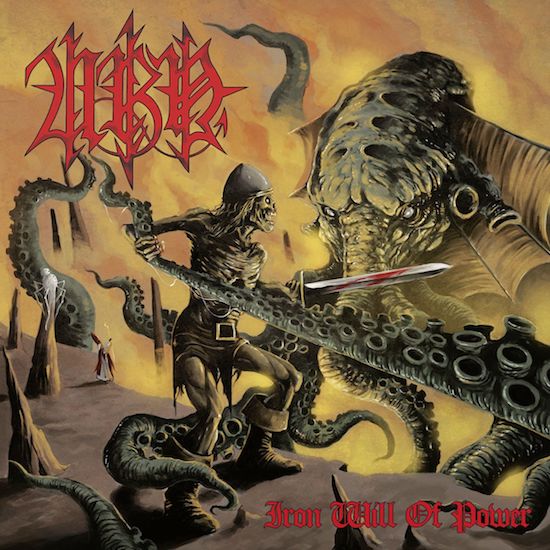 Dear review readers, I tell you a secret. I strongly suspect that the entire Finnish society does nothing else than playing, producing and publishing black metal the whole day long. At night they drink. They never sleep. This is my only explanation for the tsunami of sinister metal records from this fascinating country. Here we have Urn who return quickly with a new album. They do not play pure black metal, but who wants to be that picky? Their new effort combines black and thrash metal once again. Only the calm intermezzo "Gates to Hyboria" does not offer an extra portion of anger and rage. Apart from this minor detail, Urn score with consistency. Although the line-up was affected by massive changes (lead vocalist and bass player Sulphur seems to be the only survivor of the trio that was responsible for the formidable The Burning in 2017), the band did not modify its way of proceeding and this is the first good news, at least in my humble opinion.

But each coin has two sides and the unchanged style makes it easy to compare the rather simple-mindedly titled Iron Will of Power with its predecessor. Their previous work has set the bar pretty high and I must say that the new album has no track that fascinates immediately. This was the great strength of "Sons of the Northern Star", the advance track of The Burning. Yet the new album works differently. I was slightly disappointed after the first round, but with every new spin the album grows. One thing is for sure, Iron Will of Power avoids fillers successfully. Each and every regular track can rely on a solid and stable fundament. I am not listening to one of these hundred-riffs-per-song-albums, but Urn's compositions do not suffer from primitiveness. Despite their conservative designs, they deliver a proper degree of excitement, because their single parts blend seamlessly with each other, the choruses are not going nowhere, the riffs sound vigorous and the solos serve the songs instead of mirroring narcissistic presentations. Maybe the band should have reduced the number of mid-tempo parts. Compared with other bands of the bastard genre, Condor from Norway for example, the Finnish ruffians drive rather slowly down the hellish highway. But this is only a nuance and I cannot blame them for lame, powerless parts. I just have a probably pathological need for speed.

Urn never lose control. Hysterical screams and somersaulting sequences do not occur, but they score with precise riffing and well designs. "Demonlord" has an intriguing bridge and a great chorus, the opener is fully convincing and "Spears of Light" does not only have sparkling guitars. It also surprises with partially clean vocals. There exist wilder form of blackened thrash and some triumphant lines create a rather glorious than an infernal feeling. But already the previous work did not only deliver furious pieces. Instead, it housed some melancholic tracks like "Wolves of Radiation" as well. Thus, the band has remained loyal to its roots and its supporters. In addition, the dudes did not forget to keep a close eye on the technical execution. From this it follows that the album benefits from a guitar-dominated yet well balanced sound. It does not convey that dirty underground feeling that some groups emphasize. However, the snotty attitude of the formation is beyond doubt as soon as Sulphur commands "on your knees" - and these are the first three words of the opener's lyrics. I admit that I do not kneel before my speakers, I am still sitting comfortably in my chair. I am simply too old for this kind of black thrash yoga. Nevertheless, Urn can count on me, because this album is - after four or five listening sessions - on a par with The Burning in view of the black and nasty fun it creates. It is paying off to do nothing but working on new extreme metal songs. Hail to Finland.