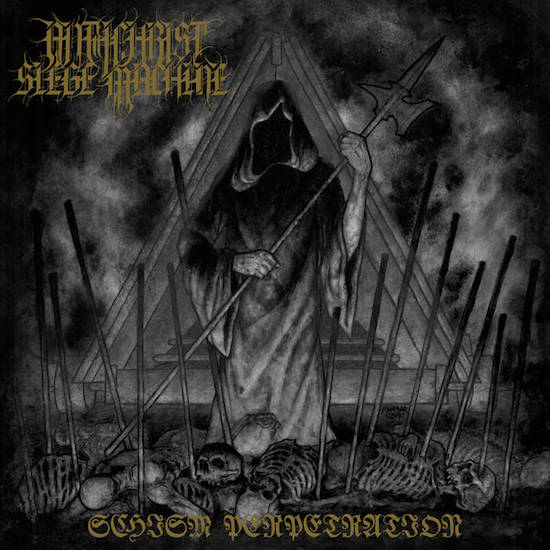 Richmond Virginia’s Antichrist Siege Machine has set foot on the battle ground with their highly anticipated full-length record, Schism Perpetration. Since hearing their Morbid Triumph EP in 2017, then being impressed by their 2018 demo MMXVIII I was more than eager for more new material from the war metal duo. So hearing there was a full length in the making caught a lot of people’s attention including mine. Schism Perpetration is comprised of 5 new tracks with 4 of the 9 existing originally on their 2018 promo MMXVIII. My guess as to why they chose to do this is 1. the material written on said demo correlates with the primary subject and feel of Schism Perpetration and 2. the MMXVIII sounded like it could have used a bit of a push on the production. Though I would prefer to have the reappearing songs released separately, they seem to have been modified lengthwise, production-wise and musically; though only new 5 tracks, I find what's offered here to be acceptable, and the old music though edited is a justifiable supplement. I’m aware that Scott and Ryan are associated with other bands, none of which I have listened to, but to many, their names should be recognizable thus giving Antichrist Siege Machine a bit of a promotional boost. And where the compositions are concerned when compared to other threats, ASM definitely appear to be leveling up and poking their chest out at some of the more important in the genre.

There’s many claiming to play war black/death metal and few that actually play that format of music; it’s a genre that needs to emanate hatred vocally, lyrically and instrumentally and ASM does precisely that on Schism Perpetration. Vocally forecasting hate from 'Incinerated Enemy' onward, to violent spasms like 'Cleaved from Flesh', 'Prime Mover' and 'Apocalyptic Despair'. The tracks play in resemblance to theme music for a nuclear launch on humanity. The drumming clatters-on to the buzzing guitars; and vocals come harping down as if an overcast sky of black clouds popped and instead of rain, it spat arrows. Schism Perpetration is a most intimately risqué love affair with chaos and depredation; like a couple going at it in Amsterdam. For a comparison, I would say Schism Perpetration falls somewhere near Pig’s Blood self-titled release. The fury comes in all paces even when touched by the hand of mid paced magic and that rushing sense of danger is still brought to life, therefore keeping the tension steadily reinforced. Also, it does not display exhaustion during the run but builds a sort of climax that fluctuates through the use of multiple tempo shifts. Vocals are primarily death metal and are very well done; however, I prefer the style used abit on ’Prime Mover’ and ‘Apocalyptic Despair’ that have a bit of a corrupt twist of barks and growling early on, plus some highlight old school death metal riffing adding to the flare.

Overall, Schism Perpetration is still a war metal record with noticeable death metal influences that most would be pleased-with, by the end of the full session. The variation available is adequate, thus their arsenal is not short of ammo. Schism Perpetration is a solid first full length but I think they can do much better than this. For the next entry, I would like to see the drumming being played at a faster rate, it’s acceptable here, but would sure do greater justice when considering the vocal ability showcased. Antichrist Siege Machine are a serious bunch, somewhat still laying out their tools in preparation for the grand massacre.