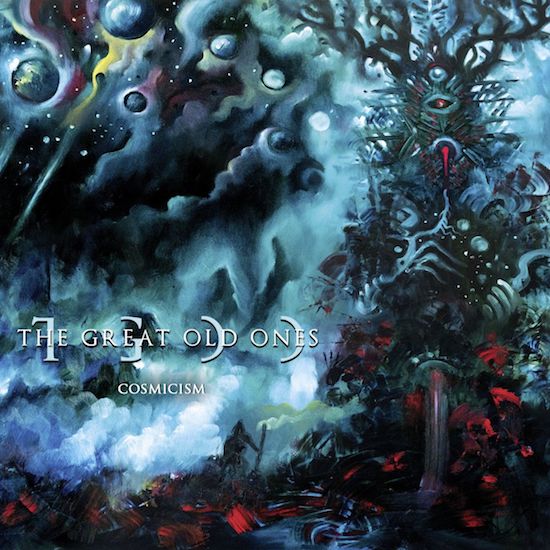 Translating a written work of fiction into a musical piece does come with its set of challenges. The music must be able to portray an atmosphere that is very similar to the one intended by the author. The French post-black metal band The Great Old Ones is one of these bands that managed to successfully adapt a literary work, in this case Lovecraft’s stories, into music.

An extreme metal band using the work of Lovecraft as an inspiration is certainly nothing new. This can be attributed to the subject matter of his stories which tends to revolve around the concepts of misanthropy, hopelessness, absurdity and insanity. As such, black metal is especially well suited to display these emotions and ideas through its dissonant and entrancing music. For The Great Old Ones, the portrayal of looming fear was achieved both through the thick layer of dissonant guitar riffs and atypical song structures. In fact, the change in tempo, emphasis on instrumental sections and multi-layered track does give a post-metal vibe, hence why they tend to be classified as post black metal.

Throughout their musical career, The Great Old Ones kept a very constant sound and thus only slightly innovated musically between each album. In fact, it could be argued that the only noticeable change between Al Azif, Tekeli-li and EOD : A Tale Of Dark Legacy would be the production quality as well as the themes portrayed. While the album Al Azif was produced as a compilation of multiple Lovecraftian short stories or themes, Tekeli-li and EOD... each focused on a single story being respectively At The Mountain of Madness and Shadows Over Innsmouth. On Cosmicism, The Great Old Ones decided to create an album that would treat about the multiple deities present within the Lovecraftian universe. As such, the album is constructed in a similar way as Al Azif where each song are self-contained and only loosely connected to an over-arching theme. This would be my first complaint about Cosmicism, as it doesn’t have the magnitude and grandeur present within their last two albums.

Musically, The Great Old Ones opted for a far more spacious sound, making every riff sound as if they were coming from the confines of space. The production value of the album is on point with their lyrical theme showcasing immortal and apathetic beings. The first and second songs, 'Omniscient' and 'Of Dementia', which treat respectively about Yog Sothoth and Cthulhu, are great examples of how the mixing of the guitars can give such a grandiose atmosphere. The first song contains the most melodic riffs composed by The Great Old Ones while keeping the post metal influences in terms of song structure.

The wailing guitar sound for which The Great Old Ones are known for is highlighted in the 'Lost Carcosa', a song which deals with Hastur the Unspeakble, also known as the King in Yellow. The song 'A Thousand Young' is a slower and heavier song covering Shub-Niggurath. This song shows the ability of the band to adapt their music to a gloomier atmosphere and a slower pace which is where they shine. In fact, the influence of doom metal can also be noticed in their last song 'Nyarlathotep'. The Great Old Ones expanded their music by slowing their pace towards end of the album which brings a breath of fresh air to a style that didn’t evolve a lot since Al Azif. A contrast to these slower pieces is the second to last song 'Dreams of Nuclear Chaos'. It must be one of the most aggressive songs on the album as it blasts away at a dazzling speed, raving about Azathoth.

When taken individually, each song is quite enjoyable and showcases the band’s strength in translating despair, otherworldliness and terror into sound. However, therein lies the weakness of The Great Old Ones as the album feels very dense and too long, making a full listen a bit tedious. While I would recommend the album to any fans of Lovecraft or black metal, I still think the greatest strength for the band was showcased through their album Tekeli-li where every song was strongly connected through the retelling of a short story. There are still many novellas that The Great Old Ones hasn’t tackled yet so there is still much room for the band to explore. As the occultist would say Ph'nglui mglw'nafh Cthulhu R'lyeh wgah'nagl fhtagn!