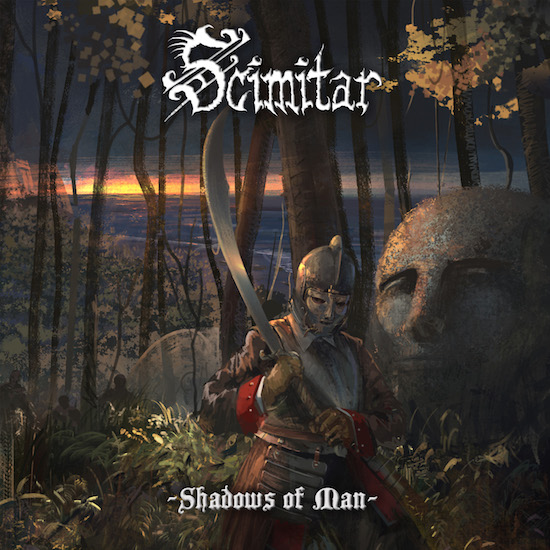 Scimitar plays a folk driven brand of melodic death metal that would take some time adjusting to especially if you’re into the more traditional style of the genre. What makes it different is the vocalists' way of singing. He has the folky tone, but his pattern is more reminiscent to that of a cross between folk metal vocal patterns and that of a rap musician particularly on the second track ‘Knight’s Collapse’. It’s very much an odd combination that Scimitar have managed to make work on that instance, however it slowly dissipates to a more approachable form as the album progresses. Had I known this prior to hearing the music I probably would have stood clear of Shadows of Man, thus said, I’m happy I was uninformed because the music here and the significance of the themes behind it is fantastic. Shadows of Man is Scimitar’s 2nd full-length record following 2010’s Black Waters. As for being a melodic death/pagan metal band with some folk metal influences, they perform commendably when fusing the genres to create a memorable release.

Through their melodic soundscapes varying among marvel, strife, joy and unraveling beauty, Scimitar are able to keep the fundamentals of all the genres used in presenting themes that not only are merged well but has some relevance within the here and now. Their lyrics appear to deal primarily with the subjects of war and mankind's impact on nature (the way I interpret it); hence some of the song titles may give away the idea brought to the front of the music. Ranging among tales of battle to the collapse of nature through the modern age of accessibility and comfort, Scimitar's music is thoughtful and ventures beyond the trivial and meaningless to create an impacting record. In doing so, the band comprised of Clayton Basi (drums, vocals), Noel Anstey (guitars, vocals), Agnus Lennox (lead vocals, bass) and Jesse Turner (guitars, vocals) make sure to keep cohesion at the center of their songs.

Noticeable as Shadows of Man progresses the music becomes darker, a bit mysterious and ominous as though predicting some sort of large-scale downfall. 'Wandering at the Moon' a favorite on Shadows of Man presents the contemplation of man, his role on earth and the impact of his actions. Though most of whats covered on songs such as 'Knight's Collapse', 'To Cultivate With Spears' and 'Shadows of Man I Imperium' tell of battle and survival, the few instances of introspect and wander are the more appealing here. The instrumentation is solid and even produces a relaxing feel even on the more battle themed songs heard on the album. This has to do with the tuning of the guitars hence they’re not distorted in the slightest and may even resemble those used in folk metal. Rather than appearing harsh or dense their light tuning creates an air of placidity so you can kick your feet up and listen with ease. The guitar work is great and truly steals the spotlight with excellent performances on ‘Shadows of Man I Imperium’ and ‘Shadows of Man II Cataclysm’ while the drums do a good job of keeping up with the pace. In closing, the acoustic moments add a layer of serenity heard on ‘Mysterium, Tremendum et Fascinans’ then its curtain call.

Through Shadows of Man, Scimitar prove they are well above the mediocre standards of countless others and are clearly a wrecking force musically.