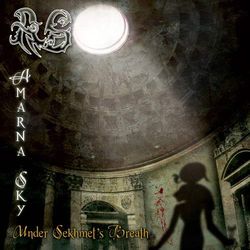 Being a longtime fan of Nile, and Middle Eastern sounds and culture in general, it only made sense for me to review this album.

What we have here is Amarna Sky, a band hailing from Sao Paulo, Brazil. Not really the place you would expect for a band with tons of Eastern influences. That does not matter in the least though, as obviously music is universal. If anything, I think it’s really refreshing and of course very different from the other metal being produced in Brazil.

“Beneath the Seven Hators Gaze” opens up with a moody, dream like guitar sequence, which instantly got my nod of approval. Though intros like this are done to death and very cliché, if done correctly like it is here, the result is positive. Around a minute or so into the song, the guitars and drums kick in, giving us an important glimpse as to what the remainder of the album will sound like. The drums sound natural, which is a nice surprise, and the guitars sound beefy and thick. The song picks up pace, and again to my surprise, the track that follows it is not a flurry of notes or insanity, but quite subdued. So out comes “The Last Scribe”, growling, with a thick, doomy riff. What really caught me off guard, though, were the vocals. They’re clean! That’s right. The last thing I would have expected, to be honest. Once I got rid of the initial “whoah?”, I decided that you know what? This works. This really fucking works. And this guy can sing. Again, another breath of fresh air, as I was expecting deep, vicious growls. I’m glad the band didn’t play it safe and went for another route.

The riffs throughout the album are mostly simple, groovy doom riffs, but done well. Take the riff in “Liturgy of Power” and the main riff in “Temple of Iconoclast” – they are just ballsy, doom riffs with enough Middle Eastern fire to make them interesting. The latter song also has quite an incredible solo section, definitely worth checking out.

The most important aspect of this album to me is the atmosphere, which I greatly approve of. It sucks you right in and takes you on a musical journey that will detach you from the real world for almost an hour, as it should do. This is not without a few gripes, however. Sometimes, the album can get to be a tad repetitive. Maybe it’s because of the music I usually listen to (technical death or free form jazz), but sometimes things can drag on. There aren’t enough “gear changes” as I like to call them, and the metronome really doesn’t change throughout. While certainly interesting to listen to, I found that there aren’t enough “peaks and valleys” as a whole, so you really have to be in the proper mindset to listen to the album. It’s not a “go to” type of album at all. When thinking about it though, that’s not really too bad of a thing. This is definitely one of those albums which needs to be listened to from start to finish, without interruptions.

Probably my biggest critique regarding the album are the lyrics. My opinion is that if you use clean vocals (not that they don’t growl from time to time) your lyrics just gain that much more importance. A line like “Walking through the heat, of the desert sands” is simply not interesting enough and sounds a bit forced. A little more imagination could have been used for the lyrics throughout the album.

The final aspect that makes this album stand out is the final track, “Beyond the Horizon”, featuring Karl Sanders of Nile. This is awesome for two reasons; the first is that Karl is a gracious guy to lay down two amazing (not to mention long) guitar solos for an up and coming band from Brazil. The second, it’s fucking Karl Sanders, and the leads he delivers here are pretty breath taking. His licks twist and turn like snakes, snapping, snarling, with massive bends and a fury of notes all weaved around the track perfectly. Also, a very thoughtful way to end this musical journey, so I tip my hat to the boys.

If you’re looking for some different, quality metal, you can do no wrong here. Everything is played well, with good, solid songwriting. It can get a bit repetitive at times, but trust me, there are certainly gems to be found here. And the blistering desert sun looks bright indeed for these guys in Sao Paulo.