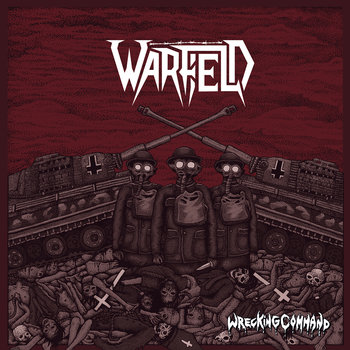 Great news, Germany's next thrash model is at the gates. Warfield hail from the rather sleepy Rhineland-Palatine, but these newcomers do not intend to sleep at all. While the once mighty monument of Destruction is slowly crumbling, these stylistically comparable dudes refresh the Teutonic thrash scene in a remarkable manner. Energetic tunes blast through the speakers, performed by three guys who could be my grandchildren. (Shit, I'm almost older than time itself.) But despite their youth, these maniacs do not start a revolution. They celebrate the primordial form of thrash and this is exactly what I like. The whole world is changing each second, but I truly do not see the necessity that my most beloved genre has to be part of this questionable game.

Warfield show all these features that already the thrashing hordes of the eighties loved. The lead vocalist snarls like a breathless street dog with malicious intentions. Thumbs up, his nagging reflects a deep understanding for the kind of vocals that this style needs. He seems to come from a good home, and I would like to send greetings to his parents, because his brother is the guitarist of Warfield and he also knows his metier very well. The sharp, sawing and shredding guitars attack continuously. Thus, the most essential element of thrash is prominently represented. Furthermore, the dust-dry and well-balanced production gives no reason to complain. Under these prerequisites, it is almost impossible to fail.

The youngsters start the album in a very exciting manner. The opening title track and "Self Deceit Race" satisfy the needs of every thrasher due to their jagged riffs, the high velocity and, especially in the case of the latter, with their surprisingly catchy choruses. The following "Barrage Fire" takes the same line while relying on a memorable main riff, high velocity and a good chorus. By contrast, "Divine Winds" shows a rather mid-paced approach. Nevertheless, it does not lack power and already the lyrics about the legendary Japanese pilots lend the song the necessary belligerence. No doubt, already these four tracks prove evidence that Warfield are able to vary their compositions in a sufficient manner without violating the unwritten laws of the sub-genre. I feel 30 years younger, although my aches and pains speak a different language. I could tell you stories about my back... but fortunately, this is no forum for sniveling old men.

Minor flaws? Yes, there are a few. We are still speaking about debutants and Wrecking Command is not the new "Bonded by Blood". For example, "Atomic Strike" suffers from a short film excerpt. It has previously been used by other bands (Onslaught, for example) and it drains the power of this actually strong track. "Vision Genocide" marks a solid number, but it pales beside more combative outbursts like the angry "Trade in Blood". Thus, the album does not reach perfection and Gary Holt can still be proud of the fact that he remains responsible for the best thrash debut of all times. By the way, Gary, stop your senseless Slayer engagement and forge another Exodus album. But irrespective of the glory of "Bonded by Blood", Holt's senile stubbornness and this band in agony called Slayer, Warfield challenge broad parts of the scene and they are definitely on an equal footing with other newcomers such as Skeleton Pit, Pripjat or other guys of this category. In an open-minded and curious scene, up-and-coming candidates are highly welcome, but here we have the pretty nostalgic old school thrash community with pigheaded conservatives like me. Anyway, even nearly senile dudes are interested in a new top model.