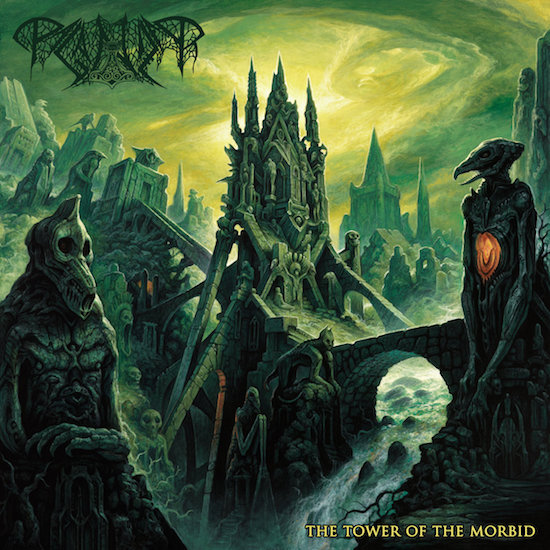 Is it possible that an old chainsaw peaks at its performance after 20 years of use? Swedish death maniacs Paganizer prove that age is just a number and well-oiled HM-2 machine can stand toe to toe with the latest trends or innovations.

The Tower of the Morbid doesn't hold anything back, giving us just 8 seconds warning from air raid siren before bombarding our senses with 38 minutes of hefty guitar chugging over devastating guttural burps from Rogga Johansson. While this Swedish grove attack wasn't unexpected, the fluid use of the variety of elements caught me a little of guard (in a good way). Seemingly same old formula of Scandinavian melody with American brute force, but this time it was used with surgical precision spanning all spectrums of death metal and performed by seasoned musicians at the peak of their craft. From opening, smashing 'Flesh Tornado', galloping through 'Apocalypse Writings' or definition of Swedish death metal 'Drowning in Sand', Paganizer rips without wasting time on intros or fillers. And that's just first quarter of the record. 'Redemptionless' adds slower Bolt Thrower like barbarity while 'They Came To Die' can stand tall to the best of what Amon Amarth has ever had to offer. Countless head-banging moments are deliciously spread out across the record with catchy hooks and melodic leads that not only score high in repeatability department but also get better with every listen. I'll be honest, I didn't love this record after the first spin but now it's the most often replayed albums in past 2 weeks!

Production wise, The Tower of the Morbid is filthy heavy, yet with clearly audible punishing blows from gurgling like a boiling blood bass and punchy drums, that set the backbone to ferocious guitar attack and crushing vocals. And Dan Seagrave cover art is not too shabby either.