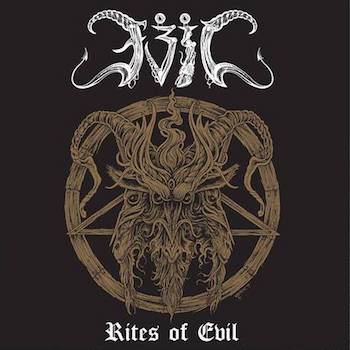 Evil hail from Japan, but don't think of friendly tourists who smile permanently while taking nonstop pictures. These guys are in a bad mood. Their kind of blackened speed/thrash metal rumbles down the road without being interested in any extraordinary features. Evil have the guts to concentrate on pure metal, although this is not the most vehement record of the genre. The fourth track, "Yatsuzaki" for example, offers an almost melodic solo. Generally speaking, the guitars are cutting rather than harmonious. This is not the soundtrack for the birthday party of a seven-year-old girl. Okay, if Godzilla has a daughter of this age, she might be an exception, but I don't want to digress.

The simple compositions shape a very homogeneous work. Nobody needs to fear any kind of bad surprises. The Japanese horde has found its niche without taking care that many bands have already exploited this niche beforehand. The roots of this Rites of Evil can be traced back to Bathory's famous debut. But for those who are less interested in historical milestones, one can say that Evil's work can be compared with outputs of groups that prefer a simplistic, rather minimalist approach that tries to pick the best of different worlds. While the guitar work builds a bridge to the old days of speed metal, for example during "Sword of Stupa", the raw barking of the lead vocalist has nothing in common with the high-pitched screaming of the early vocal artists. His pretty monotonous, sometimes nearly punk-like voice does not push the music on a higher level, but it also does no harm.

Evil do not lack energy and power, but it is also true that they have not been able to pen one or two earworms that keep sticking in the listener's mind immediately. Some riffs shake up the audience while evoking associations to (early) Venom or lesser known bands such as Quintessenz from Germany. The opening riff of "Eternal Hell", the ninth track, points into this direction, but at the end of the day, this mid-tempo stomper does not exceed standard requirements. It seems as if these dudes are not excessively talented in terms of song-writing. On the other hand, they avoid asinine, inappropriate sections and I am sure that they have the heart at the right place. As much as I hate to say it, this alone is not enough for the creation of a genre classic. I miss songs that develop their own personality.

The production scores with a certain sharpness. The guitars dominate a slightly sinister sound that finds the right mix between transparency and a certain amount of filth. Thus, the guys have no serious technical problems. They just need to put more effort into their compositions. Easier said than done (my first song is still not finished, since 1985 I am working on it...) Therefore, I am happy that at least this review is complete now.