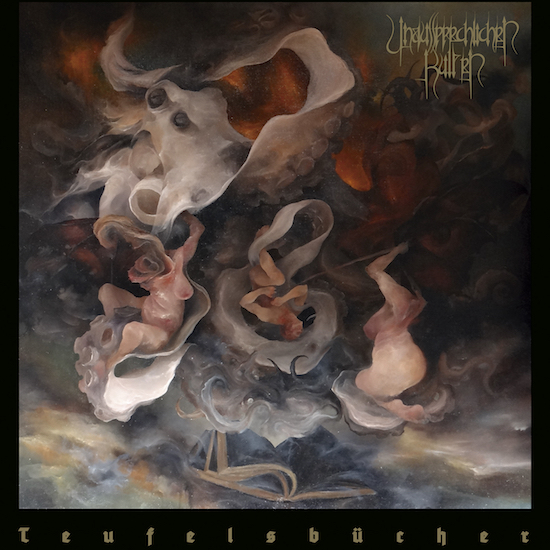 Many a book has been written to accommodate and give some representation and interpretation of what they perceive to be the devil, and the occult attached to such. The Teufelsbücher; being one that seemed to have encompassed the works of the figure hence its alternative title, ‘The Devil’s Books’, is brought before the metal world through this new entry by Chile’s Unaussprechlichen Kulten. I have often seen and heard the name on many occasions but never took the time to investigate them until now; and am I glad. These Chileans have been active in the scene since 1997 as Spawn, 2001 saw them unleash a demo under the current name Unaussprechlichen Kulten and have since gone on to produce many a violent and mysterious work. I understand Teufelsbücher will be the band’s 5th installment, thus marking 22 years of their existence as a relevant group; a milestone that many have fallen well short of. With this new tale that is rightfully under the management of Iron Bonehead Productions, Unaussprechlichen Kulten brings a heavy weighted effort both in sound and theme to celebrate their massive milestone.

Surely these themes are nothing new and have been covered by many throughout the metal world and even musical forms predating yet greatly influential and important when accounting for the existence of this extreme music; but what Unaussprechlichen Kulten does is add their identity to the foray of subjects within this codex of sorts to deliver a comprehensive and complete body of death metal musicianship that they themselves can feel achieved about. The music itself is piquant and does tell of a band that has lived through multiple eras/phases/highlights of death metal; which brings me to their sound on Teufelsbücher. Many would say it’s a flavorful collection of death metal sub-genres that most would recognize and are accustomed to; however, Unaussprechlichen Kulten activates the tingle in the taste buds of the multitudes through their teasing combinations which keep the listener/s revisiting the music; yes it’s been done in the past, but the fact does not subtract from the scenic way it is handled here.

The nature of the music on Teufelsbücher is very baroque, its ostentation can be heard early on the first track, ‘The Evil out of Control’. What a way to sprout-forth, the title is given support through the use of pirouetting instrumentation to say. Without sounding too complicated, Unaussprechlichen Kulten incorporate a fair deal of noticeable elements to their playing on the record but they keep the transitions footing deeply planted in rhythm; therefore, the music stands free of calamitously inserted elements. It does tend to take on the sound of something spinning out of control as you progress down the track order, hence the opening title, but whatever amount of technicality is used remains steadily adhesive throughout. Both a brutal and complex impression is given on ‘The Evil out of Control’, and when delving deeper down the track list to songs such as ‘Cranquiluria’, the compositions become darker whilst keeping the technical touch. Unaussprechlichen Kulten is able to take the idea being presented by ‘The Evil out of Control’ and portray a progressively darkening body of songs.

My main takeaway after rocking away to ‘The Evil out of Control’, ‘Keziah Lilith Medea’, ‘Flapping Membraneous Wings’ and ‘Necromancy and Torment’, is Unaussprechlichen Kulten play with the level of delicacy and dexterity you would expect from musicians this old to the genre; as if handling an ancient manuscript, albeit the Codex Gigas or the Teufelsbücher in this case. Neatly arranged death metal instrumentation (frenetic riffs, breakdowns, tremolo picking, blast beats) covering 2 decades and older, is met with thick and deep vox chords that all amount to an ever dimming, hazardous atmosphere. Every song on Teufelsbücher is a highlight of its own in presenting something simultaneously different and memorable. This is a record that gets better with every listen and you barely even notice its 42 minutes due to how tidy its contents are arranged. I would not be surprised to see Teufelsbücher on everyone’s year end list of best releases as it surely deserves to be. I would recommend this record to anyone who enjoys the work of Gorguts, Obscura or even Ctulu, as some qualities of those are indeed present here. Unaussprechlichen Kulten have come a long way and Teufelsbücher is their testament to perseverance and dedication.