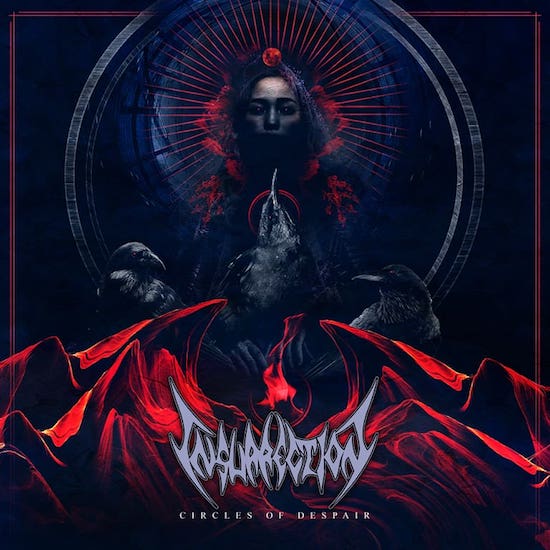 Sometimes it's better to have one main vocalist in a band, especially when you find the quality of your effort lies within the path of jeopardy. In an act of misfortune, the good cop bad cop vocals don't work as I would have preferred it to on Insurrection's debut album Circles of Despair; thus said, what could have been one of the better melodic death/thrash metal albums of 2019 was thwarted by a vocal mess. 9/10 times I avoid writing negative reviews simply for the fact I have never composed a song nor have I any experience playing the guitars or keyboards or singing for that manner; therefore, for me to dwarf the music of someone that is a lot more knowledgeable in the field through my critique, would come across as being ridiculous, laughable and insulting. I did not want to review this but since I was asked to, I was left no choice.

Setting apart the good things first; the production on Circles of Despair is crisp, you can hear every detail with piercing clarity, the length of the album is decent, and the instrumentation is what truly shines as the main selling point of Insurrection's debut full length. Now for the undesirables; Circles of Despair is vocally dreadful (mostly the screams) when considering how well the music is; also, they don't take a break nearly enough and create a sense of monotony and annoyance the screams are so bad that I would have preferred to have either just the death metal vox over it or none at all. I can even go as far as saying, had Circles of Despair been released as an instrumental record, I would have found more to appreciate about it. I get the idea of trying to give apt contrast through representation of the melodic death metal genre used, but the screams just don't do justice to the growls and overall instrumental effort.

The downfall of Circles of Despair arrives specifically when the screams are introduced at any given point of the album. Like enjoying a walk in the park on a sunny late spring afternoon only to have it ruined by an overcast sky followed by rain, the yelling vocals interrupt the enjoyment ever so often without a pardon. Even worse are the inconsistencies made noticeable through the shiny production; the vocals sound forced and resemble metalcore ones at times which would be fine for a metalcore album, but on Circles of Despair they prove to be intrusive of great instrumental work. On songs such as 'Non Existent Fall', 'The Deeper Depths' and 'Deity', I get the impression two versions of the same entries are being played, one being a well-polished, professional and convincing form or melodic death/thrash metal and the other being a rough demo version of each which is very irritating to hear.

Another problem being the screams (again) in particular do most of the vocal work with the growls barely given enough room to repair the damage done. They're so bad I wish, 'Dawn of Defeat' and 'Deity' were exclusively instrumental tracks. As a record with only death metal vocals (which I thought were slightly above average) it would be an easy 7.5/10, as a recording free of any vocals you're looking at 8/10, thus I'm afraid the final score is not within sight any of the aforementioned rankings. Insurrection really did harm to their material here which in turn had negatively impacted the final result at least from my perspective. Going forward, it’s without any doubt they have the potential to produce far better material, it's just a matter of figuring out what works and what does not.