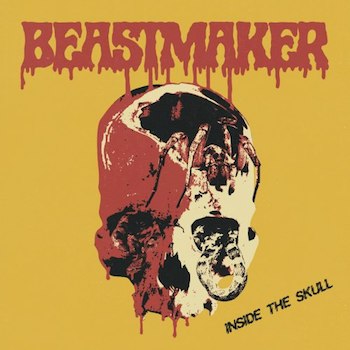 Buy on: Bandcamp
Type: Full-Length
Release Date: May 19th, 2017
Label: Rise Above Records
Genre: Doom
1 Evil One
2 Heaven To Hell
3 Now Howls The Beast
4 Of God's Creation
5 Give Me A Sign
6 Nature Of The Damned
7 Psychic Visions
8 Inside The Skull
9 Night Bird
10 Sick Sick Demon

Fresno, California's Beastmaker really established a foothold in the current doom scene with the 8, 4-song EPs they released, one after another. Having already put out two full-lengths, 2016's Lusus Naturae and this 2017 effort, on the venerable Rise Above Records, it's abundantly clear at this point that Beastmaker are a song-oriented doom trio, serving as worthy ambassadors to the subgenre for those not yet accustomed to gargantuan-length doom dirges. Inside The Skull indeed demonstrates their proficiency in such a field, as it effectively combines the accessible eeriness of a band like Ghost with the stoned-out fuzz of a band like Electric Wizard, while retaining the occult feel of both those groups.

However, Beastmaker do reveal a lot of musical personality without hesitation, even if their formula is easy to decipher. From the first note of 'Evil One', it's clear that this will be a riff-driven, verse-chorus style doom album, with little time wasted on frivolous details. While that approach could seem repetitive, remember that such a simplistic formula leaves a lot of room for the actual musical ideas to flow, and that they do. The previously mentioned opener is the first of a few songs on here to sport an anthem-like chorus created with the clear intention of indulging us hack-occultists who want to feel our hairs stand up a bit, while we open our eyes real wide, reach our arms out as if around a crystal ball, and sing along, deliberately over-annunciating the syllables. 'Now Howls The Beast' achieves this with the most success, not only because its chorus is simply the best that Beastmaker wrote for this album, being extremely spooky and long enough to leave a lasting impression, but also because the buildup works. The sample of a howling wolf, followed by the deliberate and aggressive way the crushing first riff descends into place, is the one-two punch that gives this song the momentum it needs to become a classic doom anthem, in due time. Meanwhile, intermediate tracks such as the short and to-the-point 'Heaven To Hell' and cynical 'Of Gods Creation' serve as useful and enjoyable bite-sized helpings of doom that hold the listener's interest between the more involved songs, but one can't help but feel these songs merely exist to serve their purpose and nothing else, for although they also rely on downtrodden riffing and foreboding refrains, the hooks in these songs are brief and rather simplistic phrases, as are the bridges and even the admittedly delicious guitar leads.

Praiseworthy, however, is the rather stylish way the album rejuvenates itself midway through, with the softer and more melancholic 'Give Me A Sign'. This is the perfect bridge to the latter half, which contains some of the best riffs and most intense songs, especially the meandering song 'Psychic Visions', which is sure to be a favorite for anyone who relishes in the themes of sorcery and witchcraft, bread-and-butter themes of heavy metal and certainly doom metal since their very inception. Along with that, anyone who was hoping for a stoner-oriented album will be happy to know that the last two tracks on the album contain the druggiest and funkiest grooves, concluding the album in a satisfying fashion.

Now, paralyzingly eerie musical phrases simply wouldn't carry this album as far as they do if it weren't for a handful of noteworthy characteristics about this band, the first of which is Trevor William Church's singing. Of course, there's no lying about it, it's nothing new for doom metal. In fact, Trevor's style of singing is an example of one of the most commonly sought-after voices in doom, after, of course, the mumbly style of Ozzy Osbourne. What it is, is a somewhat youthful, British sounding voice that sings with a winding, slithering kind of tone -- quite reminiscent of NWOBHM singers such as Zeeb Parkes from Witchfinder General or Kevin Heybourne from Angel Witch. Trevor is the main creative force in the band, singing and playing guitar, but his fellow doomsters, bassist John Tucker and drummer Andy Saldate, make up an excellent rhythm section. John's bass sound is as heavy as uranium, and it's the reason why the riffs seem to come down with so much force, and he plucks with sinister conviction. The same can be said about Andy when he strikes the kit, as it truly feels like the bones holding up the meaty guitars and bass, and it's sparing enough on the cymbals so as to only use them as tasty accents, which is a well-taken lesson in doom metal, to achieve that brooding sound. While Trevor's guitar leads do command a tremendous presence during their relatively brief duration, they owe that presence to this formidable rhythm section, which never ceases to continue laying down the doom, creating a very ritualistic atmosphere.

Overall, Inside The Skull is a somewhat poppy and formulaic doom metal release, but it wears these tags with enough class and distinction to be a respectable offering to both new and seasoned fans of the subgenre, since the pleasantly accessible elements are well balanced, and work in conjunction with, the sinister and occult ones. This band is certainly in the running to be among the most notorious doom-cults lurking in the scene today, and with all the menacing ideas combined into the neat package that is Inside The Skull, it's not at all hard to see why. Order a copy, dim the lights, light some... um... incense... and give it a spin, Beastmaker is a cult you won't regret joining.