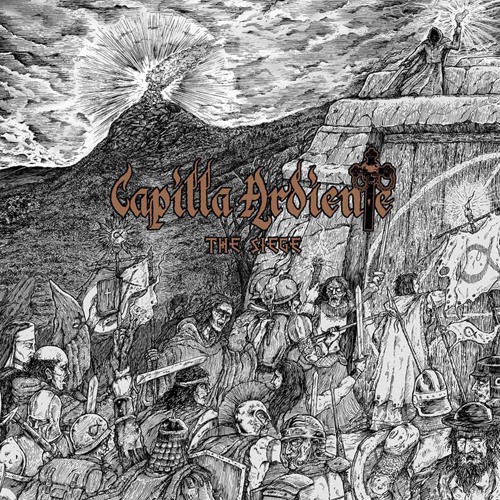 Chile’s epic doom metal quintet Capilla Ardiente come riding boastfully with their second full length installment The Siege. It’s been five years since Bravery Truth and the Endless Darkness followed by a sensational split with Evangelist in October of 2014, now in 2019 they're called again to deliver spellbinding tunes of doom. Marked by soaring epic vocals of front-man Filipe, Francisco’s vivacious drumming and tone-full strings from Claudio, Julio and Igor, The Siege pulls you slowly into its kingdom of revelations and omens. Like so many fine discoveries Capilla Ardiente arrived as a recommendation, one that I’m pleased to have heard. Given the season of Autumn is nearing, this is just the kind of music you would want to be spinning if you're into the slower, steadier hand of metal. If a band is eligible to be on a split with Evangelist, then that band is by default a serious entity; and what is gifted to the doomed masses on The Siege proves that Capilla Ardiente are indeed such.

The Siege slowly picks at your consciousness as it develops its imagery and story during this exile’s deep introspection and absorption of knowledge through seclusion. This really speaks to the listener/s' sentience, as it is through this tale of self-discovery and mastery, the music invites whomever to construct their own astral solitary confinement or (perhaps they already are in such a place) to seek out the key to understanding and growth. ‘The Open Arms the Open Wounds’ resembles an acceptance of one’s self, for it is only through such intimate cognizance a being is able to outgrow the chains of its psychological constraints. Instrumentally I would say it’s a display off metamorphosis; the manner in which each guitar notes owns-up and takes responsibility in carrying the listener through the journey of tribulation and progression. The guitar solos are bodacious and supply contrast and a sense of thematic connection among multiple emotional states occurring.

The vocals and drumming stand like the enormous pillars upholding a temple or citadel, they’re delivered in decanting fashion to the listener/s; though technical at times they support each other through well-coordinated time signatures and changes in pacing and tone. Having enjoyed the opener ‘The Open Arms the Open Wounds’ much, I was betting the same standard of musicianship would follow and it did, hence ‘The Crimson Fortress’ and ‘The Spell of Concealment’ followed-through on the promise in relaxing fashion. Both being a bit less dreary than ‘The Open Arms the Open Wounds’, more of an assertive tenor is introduced to divert from the despondent undertones and tackle the feeling of a being risen from a state of enfeeblement, to now looking towards the horizon with expectation and readiness of what is to emerge. The music does feel like you’re reading through a novel patiently page by page the way everything falls into place so neatly. Plus, from what I was able to gather, The Siege is a continuation of the concept represented on Capilla Ardiente’s debut, Bravery Truth and the Endless Darkness.

The Siege is not a record you can rush and expect to feel fulfilled, it was meant to be absorbed moment by moment because not only can one interpret the material being that of a fictional tale, it also takes a deep stare towards the direction of reality in forcing the individual to question the greater picture. Introspective is but an understatement when trying to describe the meaning behind the music, seems to be more happening sometimes than inner observation. ‘Fallen Alphas and the Rising’ brings it all to a close with the instrumentation showing no waning in confidence, that which was gifted in the beginnings carries through to the final note played on The Siege. Fluctuating among mid ranges, highs and lows, Capilla Ardiente has given the genre something that will be revisited and loved many years to come. The Siege is a meaningful body of work that evokes the subconsciousness through passages of euphoric doom metal.