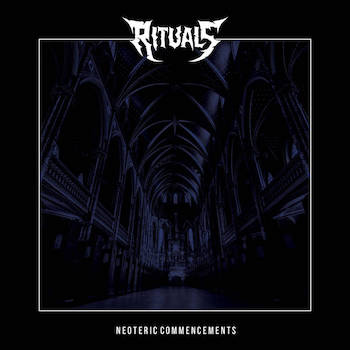 Its melodic death metal from Australia, and these lads put on a decisive show here; I can’t speak of any current comparisons or references to Rituals’ debut EP Neoteric Commencements, because I avoid the majority of modern melodic death metal; but this comes with some convincing compositions in doing beneficial service to the modern strain of the movement. Most of what I know as melodic death metal these days is very cheesy, but Rituals plays against the siren of what has become of the brand, a wailing cry of mediocrity, primarily by well-known bands. Though you can detect the staple formula being used in the working mix, the overall impression comes across as having some level of depth; a principle often taken for granted.

As mentioned I can’t compare or give reference to most modern death metal bands, however what I can point out is the Dark Tranquility influence throughout the album and particularly on the first track 'Wake of a Dead God’s Robe'. Those guitar leads are well within the veins of Dark Tranquility’s more linear compositions. Apart from that, Rituals bring a fairly blunt performance with most of the songs having a predictable yet enjoyable format. The four songs featured don't stray away from the genre’s formulaic pattern and elements, but simultaneously they sound neither worn out nor tiring. By keeping each entry at a manageable length, the music displays favorable qualities, more specifically, replay ability; after all its an EP which are usually short length; but I have seen many bands make a 20 minute or less record seem like an hour long with monotonously stagnating musicianship. The variation of Neoteric Commencements’ pacing prevents the stain of abysmal boredom, (with boredom being characteristic of most popular modern melodic death metal bands). The vocals are gruff and installs a rowdy element to the album that sometimes reminds me of old Amon Amarth while the riffs and drumming handle the melodic drive. You get to songs like ‘Drown Amongst Serpents’ and ‘The Eighth Door’ and can't help but notice how much more adhesive the music begins to feel; as if constructing a circuit, every apparatus utilized succeeds in igniting the spark of functionality when connected. Transitions appear in tune and requisite to the music while rhythmic flow is not sacrificed for unnecessary filler.

What helps these songs to shine is the production Rituals used; it’s not too clean and has a slightly unpolished smear. I think the guitars could have been a bit louder or thicker in the mix particular when playing along with the vocals that in contrast is almost diminished in some cases. There were also opportunities presented for guitar solos that were missed such as on ‘Slave to the Tyrants’ that would have been a welcome contribution and balancing factor to the ample catchy guitar leads. Apart from those minor flaws, I do not have anything unfavorable to say about Neoteric Commencements. This is one of the more promising debut Ep's I have heard for 2018; and for a new band that’s making an ideal mark. I hope Rituals’ full length surpasses this effort should they decide to create one. Neoteric Commencements is an above average debut that holds voluminous potential.