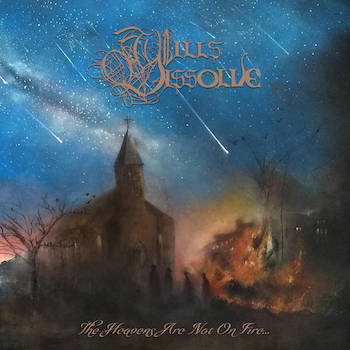 Buy on: Bandcamp
Type: Full-Length
Release Date: October 26th, 2018
Label: Independent
Genre: Death, Post-Metal, Progressive
1 The Heavens Are Not On Fire
2 So Do Not Mistake These Ashes
3 For Signs From On High
4 On This Cold November Night
5 11-13-1833

For a long while, I rarely listened to this sort of stuff. Bombastic, progressive, multi-genre fusions along the lines of Akercocke and Enslaved is some of the best music out there when done right, but "extreme progressive metal" is perhaps the hardest sub-stratum of metal to pull off. Theoretically, it's perfect - you take the best bits and pieces from all the different music you like and weave it into a piece that encompasses all of those emotions - beautiful, heavy, dark, grandiose, delicate at the same time. What causes most bands in this style to tank, especially the amateur ones, is either a lack of songwriting that has a clear path for the listener...or shitty clean singing. When you're trying to do too many things at once, it becomes exponentially harder with each new element added to keep songs consistent and coherent.

That multi-faceted type of auditory magic is a tempting thing to pursue, and indeed many artists try. Some even get a bit more hype backing them, like Ne Obliviscaris. I'm sure even a novice metalhead has been burned a few times by this - maybe Opeth wasn't everything they were made out to be, maybe you've just gone into an album expecting a "daring, bold fusion of contrasting elements" like the promo blurb told you and you got something that was directionless and flat. It's fair to think you might be hesitant to check out a Blackwater Park-styled extreme prog album, featuring unknown amateurs, with no real other press backing it at the time of its release, as is the case with The Heavens are Not on Fire... but they pulled it off. I was just about ready to turn this off at first, but it had enough happening for me to at least give it one full go. This is a super dense album that takes some time to wrap your head around, but trust me, it's worth the investment.

There are a few benefits that can come from being shrouded in the underground compared to a star-studded supergroup, one of them being chemistry. Wills Dissolve has had a stable lineup in their short five-year lifespan (three at the time of recording this album) and you can almost feel the collaborative energy in how the instruments call and respond with each other, taking turns in the spotlight. Sublime, delicate clean passages slowly add more notes and drum rolls until it becomes time to pass the baton to the singer with a soaring chorus, or jump into a uniquely textured death metal riff, and even the fade-outs and fade-ins have carefully timed interplay that made the transitions feel smooth, even across a wide range of sonic textures. Everyone feeds off of each other's strengths in this band, creating something much greater than the sum of its parts in the process. Too often there's a laser focus on the individual brush strokes of a certain section, and you lose sight of the full picture. The Heavens are Not on Fire... never has that problem. Every buildup and extra spice are placed incredibly well. Sometimes with sprawling epics like this I lose track of where the songs end and begin, but a song like 'So Do Not Mistake These Ashes' (my personal favorite number) has multiple different movements and styles within it, but every single riff can be linked back to the main idea they established at the beginning. Not only that, but the clean vocals are incredible, and you yearn for them to return. What a fuckin' tune!

It takes a little while to get going, I'll admit - the intro track feels like it's always leading into something else, but that's just a testament to how this album is structured to have a beginning and an end in the same way each of the individual songs are. It slowly draws you in with the opening track, it's throwing the kitchen sink at you by track 2, it's plunging into the heavier depths by the middle album, before gradually emerging in a series of slow, triumphant ballad-style moments, with a little epilogue at the end. Simply put, this thing is written masterfully, and it's only getting better with each go around. There are layers upon layers of gorgeous melodies to pick apart - even within sections that are meant to be aggressive, this band has an ear for hooks that feels effortless in its execution. Unlike most bands in the style, the guitars don't wander about, the intensity is much more focused...but it never gets to the point where it no longer feels elegant (a la something like Shadow of Intent). This thing is really all over the place, though, as clear as the path is - this hits everything from folk to black to doom to death the prog, sometimes seemingly within the same riff.

I briefly alluded to it earlier, but the clean vocals are my personal star of the show. Without them, this might have just been another boring extreme prog album, but the evocative yet restrained singing that the vocalist throws in is tasty as all hell. He could easily be a ringer for Akerfeldt himself with his natural inflection, and he's got the energy and vitality that the Opeth guy has been losing for over a decade. It's the little things that put The Heavens Are Not on Fire... head and shoulders above nearly any independent band (they're not unsigned anymore, but were at the time of initial release), with so much detail and care paid by every musician to every individual section I'm honestly surprised that it didn't take the band ten years to write this. Even just looking at metal on the whole, albums this well put together are a rarity, and The Heavens are Not on Fire... is accessible enough that I'm going to keep coming back to it for a long, long time. Definitely worth a spin, but make sure you have time to listen all the way through.