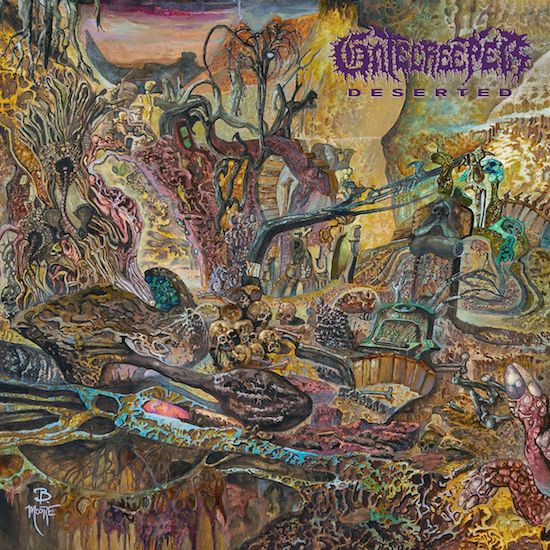 I was expecting a whole lot more from Gatecreeper whom have established quite a following and more so being signed to a major label that of Relapse Records. I guess you could say this is the curse that comes with residing under a publisher the likes of, the quality of the music suffers either from complacency or a strain due to timelines needing to be met as a result of contractual obligations. All that plus being involved with other bands and juggling your own shit. If such happened to be, then it held back what could have been a remarkable record.

The first half of Deserted opens on a very good note, arguably the best song here, the self-titled track ‘Deserted’. With the progression of time, more great tunes make way towards the light in the form of ‘Puncture’, ‘From the Ashes’, ‘Ruthless’, and ‘Everlasting’ thus showing-off some of the best work Gatecreeper has crafted to date. However, that air of excellence begins to fade with the introduction of ‘Barbaric Pleasures’ and continues to deteriorate to the point where the listener and more-so the album takes on a deserted feeling.

I was given the impression Deserted was originally recorded with the intentions of being released as an EP, this is due to the contrast made audible when comparing the first five tracks to the final five. What I found occurring was Gatecreeper’s music getting lost amidst complacency. The occasional melodic leads are thrown in for the sake of making the music appear diverse but does not manage to clear the sand of wandering footsteps. ‘Everlasting’ sounds like the type of song a band would close with, thus aiding my claims, as what follows appears to be material tacked-on for the sake of fulfilling the album length required to be labelled a ‘full-length’. The music on ‘Barbaric Pleasures’, ‘Boiled Over’, ‘In Chains’ and so forth fall short of meeting the standards set on the A-side of Deserted; not implying what is offered is horribly lackluster, not at all, as there are instances present on ‘Absence of Light’ and ‘Sweltering Mess’ that offer appealing musicianship in melody that conjures a sense of solitude in some hostile and unforgiving world; however, in comparison to the first five tracks, they fall well short of the bar set, with arms stretching achingly to attain the level of ‘Deserted’, ‘From Ashes’ etc.

Inconsistency is what lead to Deserted’s downfall, the crossover characteristics of Powertrip make too much of a presence on the record thereby overwhelming and pressuring the death metal element into a corner. What also comes as a letdown is the reduced usage of guitar solos; had they kept the method or at least put Eric and Jack to arm-wrestle more often, the B side of Deserted would have been more appealing in retrospect. As mentioned before, complacency seems to be a factor affecting the record, knowing that your name alone is good enough to drive sales is often times harmful to the writing, given less effort is exerted in comparison to an unsigned band that plays their better hand each new entry; not stating that may be entirely the case here but it certainly appears that way. Even after multiple listens I have yet to hear anything impactful enough to change my initial conclusion. Not too happy about Deserted because I expected more especially from a band signed to Relapse Records; definitely an opportunity missed. The production is clean, the vocals are deep, drums are meaty, the bass is audible, and the guitar work however little takes the spotlight. All good assets to have, but when not given thorough oversight and implementation it causes a collapse down the line. Still many will praise Deserted given the effects and interpretations art has, but in its current form the record spells-out half-hearted or deserted in this case.