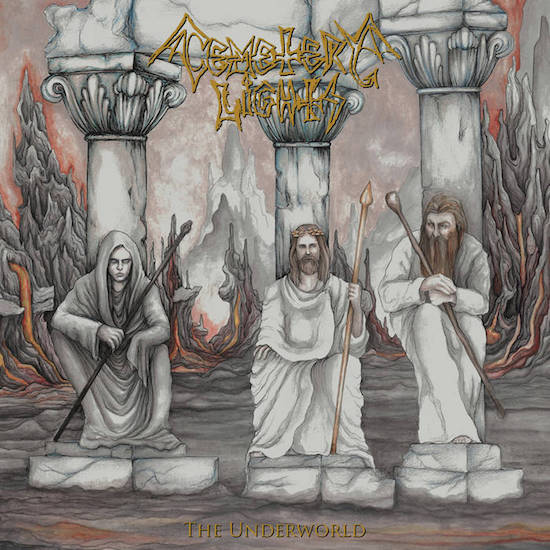 How foolish I am. I thought Cemetery Lights is a cool name for a metal band and so I decided to give the guys a chance. First finding was that there are no guys gathered under this name. It's only a single guy, another one-man-project and this is mostly a good reason to become skeptical. Second finding was that the album's sound is a catastrophe. The album sounds dull and blurred, the vocals do not have the prominent role they should have, and any form of directness is missing in this mishmash mix. The same applies in terms of pressure. With this production it is hardly possible to present a convincing full-length.

And surprise, surprise, the inevitable finally happens. This dude with the pseudonym The Corpse fails to enrich the scene. The majority of the songs is as lively as his intelligently chosen name. I am listening to bastards of black and death metal (sometimes the vocals point in this direction, for example in the desolate opener, but already in the second track they are completely emotionless and expressionless) which are ornamented with some weird sound effects, thin melodies and further unexplainable stuff from time to time. The living dead man who runs this project can play the snare very fast, really impressive, but dude, your stupid hammering does not make sense. The songs rather suffer from the overdose of velocity they get, and the almost Dadaistic fast-paced sections sound primitive and flat. Aggravating the situation, the melodies are totally amateurish. "Isles of the Blessed", for instance, crumbles due to a feeble melody in its middle part and it's a cold comfort that exactly this melody gains strength at the end of this number. Finally, some bass guitar gimmicks take the cake in this sound inferno. Maybe they had the mission to add some original sounds, but they just suck.

All in all, I must say that the core competence of The Corpse is to hide his few good ideas very well. It's possible, but no pleasure to find an acceptable solo, an expressive melody or something like that in his songs. I freely confirm that he does not deliver just a great pile of shit and the song titles indicate a lyrical concept which would have been interesting on a musically strong work. Nevertheless, the majority of the different song sequences are really hard to endure, for example the verses of "Olympus". The lame guitar work on this tune seems to be partly inspired by "Warrior", the most boring bullshit Unleashed ever released. The guitar intermezzo "Shores of Akheron" also makes no sense and the unconventionally designed album in its entirety is simply superfluous, as much as I regret it. Finally, frightening is the fact that the songs have been written primarily between 2009 and 2014. If this information of the promo sheet is true and these confusing pieces are the result of a five-year-process, then my conclusion is clear: I don't want to listen to a new album of Cemetery Lights until 2035.

The United States has produced one of the finest voices of black metal lately that being Cemetery Lights which is the project of someone/thing going under the moniker ‘The Corpse’. It was the work brought forth on The Church on the Island that lured me down the path to the debut Lemuria. Both of those EP's delivered valuable music to the underground with ‘The Corpse’ making use of creepy story telling sort of vocals and 1st wave black metal that used overtones one may be similar to those from horror themed animated episodes of the 70s. Yes, they both gave Cemetery Lights’ work a sense of identity to the point where the recordings on both EP's cannot accurately be compared to anything under the black metal banner past or present except for maybe the guitar tone used, which is similar to Mayhem’s (Norway) on "De Mysteriis Dom Sathanas". It was through The Church on the Island I discovered Cemetery Lights and since then I have been waiting for a full-blown release to be cast down.

It is with great pleasure to introduce you to Cemetery Lights’ latest work: The Underworld. This full-length recording differs in some ways but still retains the sound this project is known and loved for. Firstly, the subject matter here tackles certain spaces/domains of ancient Greek culture, and secondly where the instrumentation is concerned, The Underworld's percussion was recorded live thus increasing the immersion of the music. Apart from the new theme being forecast and the addition of live drumming, the essence of Cemetery Lights’ music remains the same; still existing comfortably within the old unfurnished oak of the early 90’s. I was worried ‘The Corpse’ would sacrifice his lo-fi unpolished production for too much clarity, but I’m glad to find even that has barely been touched. This is the same project we are familiar with coming to you with embellished song writing, and musical engineering.

In tackling ancient Greek influenced themes, Cemetery Lights brings his signature sound to the forefront and uses it to seize the atmosphere of the point in time. Listening to the opening song ‘Erebos’ which refers to the God born of the Chaos void, the music here is perhaps among the most intense and fastest to have spawned from Cemetery Lights. Therein emanates a sense of chaos through its war-metal drumming formula and wobbling bass intonations that present a portrayal of a deity being crafted among entropy and pandemonium. The ethereal boundary is also expanded here with 70’s-esque guitar melodies that envelope the idea of enchantment and horror occurring within the space tumult. Erebus is also cited to be a domain within the underworld where the dead go after meeting their fate; that is aptly represented or brought to fruition on ‘Erebos’ credit to the mysticism of the music.

Proceeding through the time machine down to later inscriptions of ‘Elysium’, ‘Isles of the Blessed’, ‘Olympus’ and ‘Fields of Asphodel’, the listener is met with the best work Cemetery Lights has released to-date. These songs serve as genuine canticles that magnify this illustrious and aristocratic era. The heroism and divinity of souls sent to dwell within the world of The Elysian Fields, to the vile and evil condemned to spend eternity in Tartaros, is adequately represented through the employment of Cemetery Lights’ eminent, arrantly dark, maleficent and at times poignant soundscapes. All-together with the black metal riffing, the doomy passages heard on songs like ‘Isle of the Blessed’ and ‘Olympos’, and the traditional heavy metal feel that comes with The Underworld, leads to a final result that is unmitigated or dyed-in-the-wool to say.

Definitely ‘The Corpse’s’ best work, many listeners will leave feeling as though being the audience of a more than satisfactory rendition of Greek ethereal esotericism. 'The Corpse’s' narrative yet ominous style of vocals is key to his instrumentation and plays a role that is just as important as the music as he manages to construct an aura surrounding the listener that is being affixed to the tunes of these diverse dominions. Whether it be ‘Hades’ which is comprised of ‘Erebus’ and ‘Tartarus’ or ‘The Fields of Asphodel', the musicianship on The Underworld is filled to the rim with sincerity as though significant sacrifice were major factors contributing to Cemetery Lights’ debuting full-length. I understand this music was recorded during 2009 - 2014 which does explain the striking similarities in the overall sound when compared to the 2 prior demos; however apart from the new theme, what The Underworld has that differs and stands out distinctively is a heightened concentration on atmosphere and more-so song writing. Cemetery Lights is a project that is truly beginning to challenge itself and the fruits of that effort can be clearly heard on The Underworld.