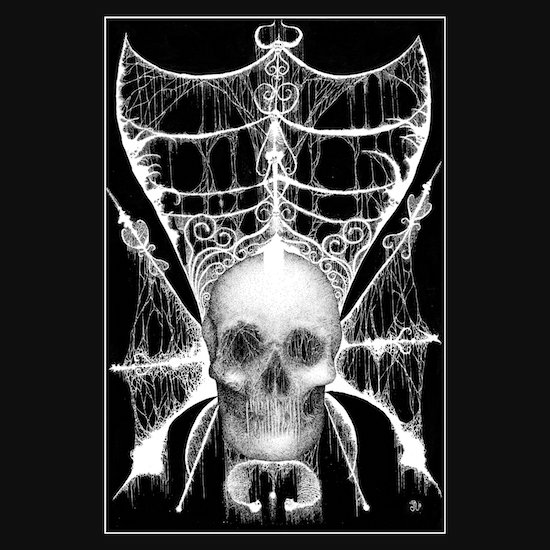 Clenched by an atmosphere of woe and worry, Blooming Carrions parts the gravel and thrusts forth with 3 tracks on their EP, Sisters in Blooming Flesh. Cavernous and dismal, heavily accentuated by distortion and blackened drumming, Blooming Carrions may have found a home in my collection. EvM being a member of death/doom band Fervent fronts the project with support given in the bass area by PkE; thus, mentioned I did get the chance to hear his work in Fervent which fell a bit short of my expectations, however this on the other hand has exceeded greatly. Sisters in Blooming Flesh is a 24-minute EP situated in the guts of cavernous and catastrophic death/black metal. Multiple aneurysms of ill-tempered outbursts, tempo changes and variations meet the consciousness of the listener whose veins could not be more abused by this musical crack. No light dare shine upon this raped meadow.

Sisters in Blooming Flesh carries on without a break it seems, flawlessly achieving an environment of hostility mostly and grief within some sections. Like a tale the songs develop along the way, steadily toggling back and forth between agony and rage. Reminiscent of a battle occurring under water, with two emotions; anger having the upper hand most times; just as the melancholy is about to raise its head for some air above the troubled sea, its pulled to the depths once again by the overpowering vice of loathe. Title track 'Sisters of Blooming Flesh' and 'Enchantment of Slaughtering' repeat the effects this creates; a feeling of turmoil, discomfort and lack of control batters the psyche mercilessly. Grazed by guitars tossed around in winds of melancholy and fury, tremolo picking is met with the gnarly touch of distortion ever menacing in its attempt to submerge whatever sentimental emotion is presented. Drums act in coordination with the dominant emotion at the time, thus having to adjust technique to fit the fluctuation.

The production is ideal for this and I'm glad it does not suffer from repetition; there is more than enough here to extract and with it being only 24 minutes, Sisters in Blooming Flesh shoots by before you could grasp a third of what is occurring below the veil. This unholy matrimony of disaster and despondency needs to be heard and should not be taken for granted given the high stagnation of the genre as it stands. Should EvK put more time into this project, its appeal, potential to expand and develop the music into something even more collateral, profound and detailed would come to fruition. The effort here is outstanding and calls for a full length follow up. Set to be released on cd and vinyl formats, November 28th, 2019 through Iron Bonehead Records, add Sisters in Blooming Flesh to your cave; an uproar of madness awaits.