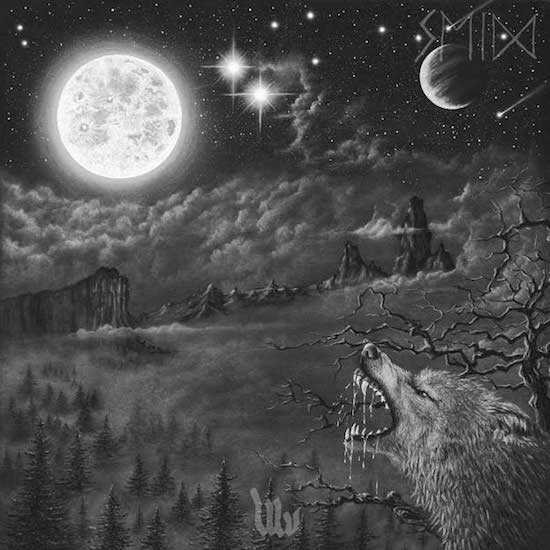 Wolves have always played a prominent role in terms of black metal. Remember the eponymous song of Marduk, Venom's "Cry Wolf" or "Impaler's Wolves", released by Graveland in 1999. Dragonflies or hamsters do not show up that much, if I am not mistaken. However, now Seid, hailing from this fascinating country called Sweden, have discovered this cute animal and they dedicate their third album to it. Ulv boasts with an adequate artwork, so far, so good, but let's check the music itself.

Seid are able to write gripping, atmospheric lines that draw the listener into the song in a matter of seconds. Their compositional formulas do not work without exception, but who creates only highlights? Usually, they realize their musical vision successfully. "A Gift for the Wanderer", for example, mirrors the song-writing talent of the dudes in an impressive manner. The track unveils a sonic kingdom of darkness and has the potential to teach the guileless audience the meaning of fear. It's a mid-paced song, but it does not lack tempo changes that create a dynamic appearance. Moreover, it cannot hide its Scandinavian roots (and this is something that can be said about each and every piece of this album). No doubt, this wanderer walks through a dark Swedish forest, maybe on slightly trodden paths, but with a firm step.

The album does not hold too many high-speed sequences. The band still rather focuses on moderate velocity and especially the more or less dragging parts remind me of Hades every now and then. Okay, the songs are not as thick as the highlights of "The Dawn of the Dying Sun", but Seid create a more than proper density, to say the least. The mix of melancholia, power and aggression has its charm and sometimes tragic and desperation shimmer through the notes as well. But no need for panic, the album has nothing in common with this whining sub-genre called suicidal black metal. Just concentrate on the coarse and raw vocals. No doubt, he homogeneity of the material results in a coherent, but not monotonous package of melodic black metal. I don't say that each and every track hits the bull's eye. Unfortunately, exactly the opener suffers from quite mediocre and somewhat viscous guitar lines. But, as mentioned before, the overall impression is a positive one.

Unlike the music, the lyrics seem to be influenced by Unleashed. Or what would you say about lines like "We raise our horns as true men of our lands"? Johnny Hedlund smiles, and I do the same when listening to tracks like "Odal Lands", because they combine venomous harshness and rather relaxed melody lines. Finally, the production also contributes to the positive impact of the album. The guitars do not lack power, the drums are transparent and especially some double bass driven sequences generate a more or less massive wall of sound. Thus, I can recommend this output of a band that obviously sees no reason to modify its style significantly - and neither do I. And if there is any wolf with another opinion, then it should be shot.