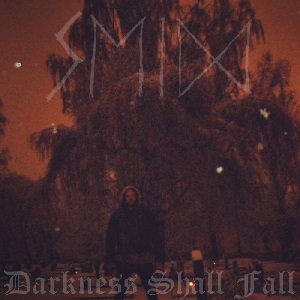 Buy on: Bandcamp
Type: Full-Length
Release Date: March 23rd, 2017
Label: Independent
Genre: Black
1 The Ancient One
2 Carnal Journey
3 The Ice Wind Whispers I Will Carve My Runes Upon You
4 Interlude - Darkness Shall Fall
5 Valkyria Horizon
6 The Promised Son Of Perdition
7 Outro - The Awakening Of The Spawn Of Loki

Seid are back with their second album. We are not speaking about a one-man-project any longer and maybe this could be one of the reasons why Darkness Shall Fall marks a positive step for the formation. The band still plays a fairly melodic type of black metal, but the guys deliver a higher degree of energy. Already the hovering guitar lines of the fast-paced opener show the newly gained power. The Swedes have found a good balance between velocity and atmosphere and this is always a solid fundament for a full-length of the black sub genre.

Darkness Shall Fall does not impress with an opulent design. Five tracks, an acoustic interlude (relatively superfluous, if you ask me) and an outro shape a rather lean work. Nevertheless, a duration of 35 minutes is acceptable and, better still, it seems as if the band was able to concentrate on the really important things. The compact configuration avoids repetitive structures and fosters a compact overall impression. Due to mostly strong melodies, the songs have a certain depth. 'Valkyria Horizon', for example, evokes an almost melancholic feeling while bordering on pagan metal. But don't worry. The tune is equipped with some atmospheric background vocals, but it is light years away from any kind of oh so funny "ohooohooo" Viking grunts. In general terms, Seid have kept an eye on multifaceted vocals. Of course, the raw and masculine grumbling prevails, but clean and slightly heroic voices or whispered wisdoms show up as well. In short, there is nothing wrong with the vocal performance.

Seid seems to consist of typical Swedish musicians. This assumption is particularly based on the fact that Darkness Shall Fall reflects a high degree of maturity. Debuts and second works from Norway or Finland often express a loutish behaviour, for better or for worse. By contrast, the Swedes mostly combine harshness and musicality in a very convincing manner - and Seid are no exception in this context. Their compositions have a good flow and they are comprehensible at any time. Moreover, the production matches this musical approach. It is robust and transparent without bowing to some unwritten laws of the black metal underground. This means that the listener is not confronted with an enthusiastic yet technically ill-defined storm. Some might say that they are missing edgy elements, but from my point of view, everything works. Even the keyboards are acceptable, but rest assured, they do not play a main role.

Maybe a small number of surprising twists and turns would be able to enrich the next work of the band, because its sound does not deliver a unique feature. Admittedly, 99% of the actual formations do not possess such a feature and maybe I am setting the bar too high. Nevertheless, I wish the guys have the courage to sharpen their musical profile. Neither the album title nor the lyrical concentration on the Nordic mythology can be considered as highly original. Anyway, Darkness Shall Fall is definitely worth listening to. Mega-fans of mid-harsh, fairly emotional black metal can add five or ten percentage points and should give it a try.