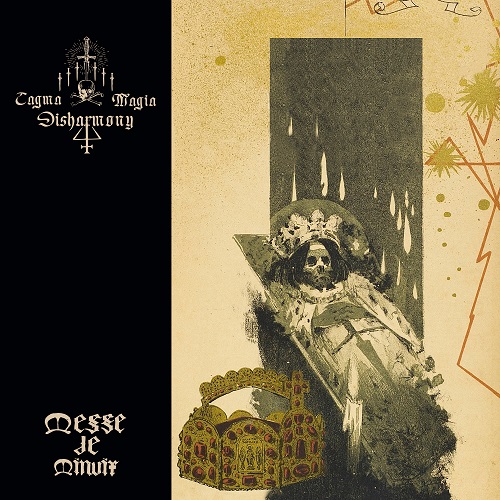 The night of November 28th, 2019 rests evermore darkly when Iron Bonehead Records re-releases Disharmony’s EP Messe De Minuit on CD and vinyl mediums. That being divine, so special to the worshipers is exalted in the honorary practice of the Black Mass. The adversary, Morning Star, he who hates 3 things; this celebration of dark mysteries and knowledge passed down through the ages, destruction of false regimes and scarring of the right-hand path re-lived on this special dusk. Disharmony are that lot of mages that anoint the cauldron of old black metal with their poison; formed in 1991 with only having conjured 1 full-length, Goddamn the Sun; thus, it was not hard to understand why ‘Hail the Witch’, ‘By the Moonlight’, ‘Into the Tomb’ and ‘Corpus Christi’ carry the yolk of what it means to invoke excellence. You're kept within its haunting milieu and at no time a feeling of relief greets the senses, Messe De Minuit acts as a session of unhindered desecration and irreverence to all things holy now even more potent through a Black Mass conducted by esteemed frontman, Kapala V King.

Dread and fear are words often thrown around for the sake of hype, but to fulfill such exaggerations (failed to be met in the case of other bands) takes discipline and knowledge, the kind telling of a Disharmony release this caliber. Timing and excellent judgment is activated on such a distinct echo of the ancients; organs and choirs utilized achieve the aura of guilt but avoids robbing the primary instrumentation of any effect. Consider all tones heard as key components setting the stage for the grand ritual by Kapala V King, even that session of calling upon The Master could be thought of as music on Messe De Minuit. Constructed such that the listener would believe it were the support in leading-up to a play of some sort, an event this important would benefit from instrumental overtones glib, though already having its own supernatural air. The mark of excellence forever inscribed upon the flesh and deeper of Disharmony, blessed with the musical touch of Maelstrom, Mephistopheles, Echetleos and N.C.M, Messe De Minuit forever envenomed and enlightened eternally.

Necromantia essences swim amidst the 1st wave of black metal wizardry, heavy emphasis on the effect of keyboards and organs smears the canopy with both mysticism and melancholy in celebratory fashion. Traditional heavy metal meets the dark and corrupt essences of black metal, riffs mend carefully a blackened stature, positioned commandingly.

In closing, Kapala V King's ceremony is for the listener's own ears; this is the ritual meeting its pinnacle of exaltation. The re-release on vinyl truly does justice to what I consider a sincere offering from a band committed to the command of black metal. Thus, it has been almost a year since Messe De Minuit's dawn and even longer since the blackening shadow smothered the luminescence with Goddamn the Sun thus putting inquisitive thoughts to work. Was this revelation merely a blur of an expansive image? I would hope that is the reality as His Majssty's the Age of Aquarius draws closer.