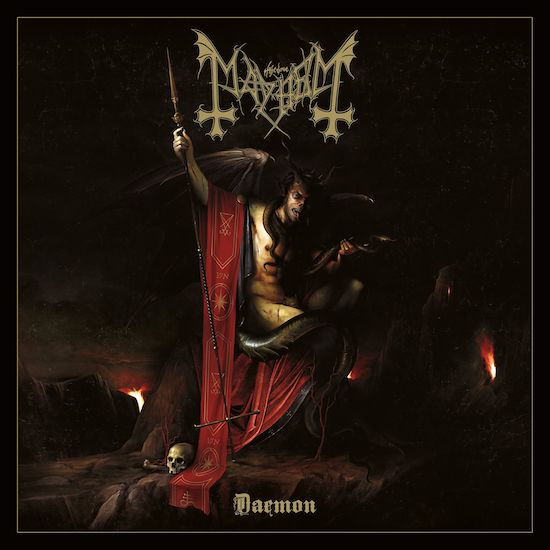 This is the first Mayhem release that I've truly liked other than De Mysteriis Dom Sathanas. Only a select few from this band that I enjoy, their latest Daemon is a gem. It captures that eerie feel to it like the old but is a little bit less grim. Being that Euronymous is dead doesn't matter on here, it's like a carrying off from where De Mysteriis Dom Sathanas left. The whole album is good. The music, production and vocals are just purely likeable especially if you like dark black metal. Some bands are even more depressing to listen to and don't listen to this on a dark day of yours unless you want to be more depressed.

Attila and Hellhammer are the backbone to this band/album. The guitars are good as well. The riffs are pretty original like the old Mayhem and this is why the album is so monumental. It truly is a staple in their discography. Daemon is everything that I'd hoped it to be. Dark, depressing, eerie, original and grim. I actually just went ahead and bought the CD first without prior knowledge of how it would sound, in faith that it'd be everything I'd hoped for. And it was and is. The production is superb, and the music just grapples it all.

I'd say download it first on Spotify, especially because it comes with bonus tracks. The CD itself in full-length is about 49+ minutes. It's good the whole way through. I love Attila's original vocals still. It's so wicked. And the guitars are done with precision. The songwriting on here is great and the leads are awesome as well. Not letting up here, this band is the best when it comes to delivering great black metal. I'd say it's probably one of their best releases ever. It's a bold statement but it's what I'm hearing every time I listen to this album! Everyone in the music community should support this band!

They really tear it up on here and despite the mood you're in I'm sure you'll like this. Every track is good. The intensity is there as is the unique vocals. The riffs are genuinely good. Probably a better riff-writer than Euronymous himself. But they're picking up where that album left off! Nothing can duplicate the early days but as long as they stay true to their roots, enjoy every minute of this one! They really know how to entertain with solemn music likeable to the select few. Own it!

Mayhem has been a relative fixture in the news outlets in recent months. The emergence of that ridiculously pedestrian film I won't even bother to name, as well as talk of an anniversary edition of the band's signature album, De Mysteriis Dom Sathanas have all but shadowed the release of the latest effort, Daemon, but, nevertheless, here it is in all of its glory.

Well, right off the bat, the opening track, “The Dying False King”, immediately sounds like the aforementioned De Mysteriis record – so much so that I found it to be rather ho-hum out of the gate. A couple of songs in, “Bad Blood” sounds pretty damn tangible. It has the viable earmarks of tempestuous speed and just enough dark to dim your sensory bulb, not to mention a damn solid bass line throughout. One thing to say about the current Mayhem – the production is much higher on this record than previous ones. There are hints of old Mayhem throughout, and these are fine; my issue is where songs seem to follow very familiar patterns, as in “Malum,” which absolutely reeks of sparse parts of “Pagan Fears” and “Deathcrush.” I've no real problem with a band touching on past glories, and from the release of the first track, “Worthless Abominations Destroyed,” I was left less than impressed in that regard. So does the rest of the album right the ship?

So, all in all, this is “typical” Mayhem in that it presents well in familiarity and style, but it seems to follow all too closely a pattern of familiarity in spots that both lulls and leaves me wondering what is missing. Granted, some of the songs on here, if not most, are really good tracks in themselves, i.e. “Falsified and Hated,” which is pure Mayhem in tone, but lends itself out to an expansive, relative area of exploration that seems to find its needed niche. I have always liked Attila's vocals, despite the many pro-Dead people who call Attila a fraud, a charlatan, a fill-in, etc. In my opinion, the vocals he did in 1993 were some of the most evil vocals ever recorded on an album, and people might be more caught up in the romance of Dead's early and tragic departure than the musical logistics at hand. That aside, Attila doesn't disappoint, and that's where positive familiarity comes into play. The growling, whispering, and breathy verbiage sets the perfect tone for the band, and despite the minimal lacking areas of the record, he's the one constant to be counted on without fail.

This album is not a loss by any means; it's a nice cup of same-old that doesn't really expand in areas it really could have, yet retains a vibe sorely missing in the absolute feces calling itself black metal today. It's really like a familiar old blanket that feels good when you find it on the bottom of the closet floor and wrap yourself in its memories. This obsession with shoegaze black metal, post-cereal-black metal, or whatever ridiculous sub-genre you wish to lump around these bands today has all but polluted the medium. These ill-crafted memes and immature giggle-fests over cats and food pictured within photos of the black metal elite are just inane. I'm one that doesn't take the black metal genre too seriously, but I also don’t see it as the clown-and-balloon act the millennials have sought to refine it as today. This is the type of record that sets the movie fan base aside from the true fan base, and tracks like “Aeon Dameonium,” “Invoke the Oath” or “Bad Blood” will, no doubt, weed out the silly and entertain the truly interested among us. I am happy to see that it's very typically Mayhem, but that it didn't rely solely on the past-is-alive sentiment too often. I think Daemon will grow on me over time.

It's certainly no "Death Magnetic" cut-and-paste job. It's solid throughout.