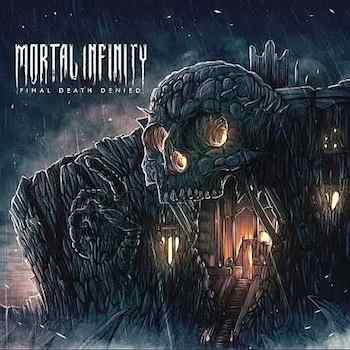 When a band loses three of five members after the first work, a following album seems almost like a second debut. Moreover, the remaining duo wants to show the rest of the world all the more that the band is far from dead. This can then easily lead to a somewhat oversized album. In any case, almost 55 minutes are usually not easily digestible fare. To a certain extent, this also applies to Final Death Denied. Two or three somewhat tough pieces have crept in, for example, unfortunately the opener. The musicians could also have kept the pieces a minute shorter now and then. Nevertheless, the disc convinces with power, competence and many an ace up its sleeve 'Cult Of The Dead' drives the listener crazy with a bulky riff and lots of speed. The unit, which has shrunk to a quartet, lets off mighty steam, but doesn't forget to include a melody in the bridge. As said, the basic riff sounds barbed, but Mortal Infinity are far away from techno thrash. This is the old school of Gary Holt, which strikes mercilessly here.

'Under The Serpent Tree' also illustrates that the guys from Bavaria were heavily impressed by the Dukes era of Exodus in terms of production, guitar work and vocals. Luckily singer Marc seems more likeable than Rob Redbeard when he stomped around the stage with his stupid stars and stripes shorts. Musically, Mortal Infinity can't quite compete with the best thrash metal band in history. Who's surprised? Nevertheless, even "Blacklist"-esque mid-tempo stompers like 'Hell Is A Crematory' release a lot of energy, not only because of the burst of violence and speed towards the end of the track.

Speaking of velocity, the guys know the close connection between thrash riffs and high speed rhythms. Even better, they know how to mix both in such a way that murderous torpedoes like 'Haunted Mental Asylum' emerge from it. Straightforward, no-frills and yet exciting, that's how my mother's son wants his daily dose of thrash. Not even the complete braking in the chorus bothers him. That would also be nit-picking in view of the vitality of this piece - and also with a view to the production I find only words of praise. Mortal Infinity successfully relies on a cocktail of freshness, ferocity and directness. As indicated above, they are more or less on a par with the more recent Exodus albums. There are probably worse references in thrash, if I'm not mistaken.

In a nutshell: Final Death Denied is a high class, if not completely outstanding second debut. Anyone who likes sawing guitars in thrash mode and lyrics about the less nice sides of life should get their money's worth here. However, it got even better on album number three, In Cold Blood. No doubt, this band deserves much more attention.