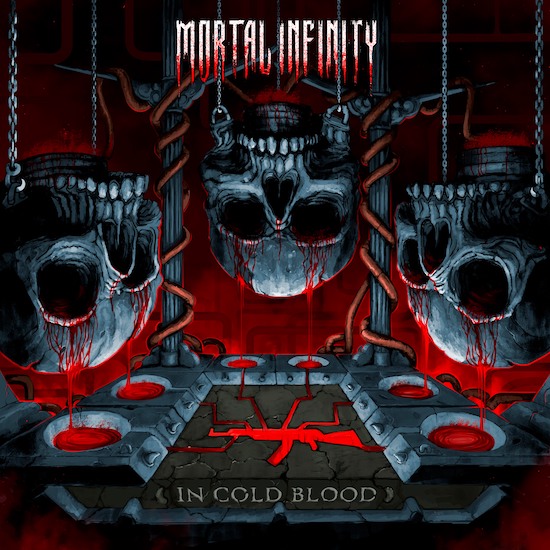 It took exactly the first three seconds of the opener 'Fellowship of Rats' – and then I added Mortal Infinity on my (admittedly very long) list of favourite bands. This outbreak of ravenous ferocity bursts out of the speakers with the maximum of energy, violence and harshness. It draws me into the output immediately. Honestly speaking, I didn’t know that Hofbräuhaus-Bavarians can be that angry! And the highly exciting curtain-raiser is just the beginning of an extremely dynamic collection of high-speed bullets and mid-paced vulgarities.

The riffs hit the listener like a whip gone mad while a few (almost) melodic parts reveal a fine instinct for harmonies, the drums do not shy away from the highest tempos, the lead vocalist leaves no doubt that he wants to ruin his vocal chords as soon as possible and the partly menacing atmosphere adds the finishing touch. These guys know the stylistic homeland of original thrash, even though the (a little bit too) modern production tries to disguise this fact. Don’t worry, the album does not fall victim to emotionless sterility, but the mix also has not much in common with the rather warm sounds of the eighties. Or is this just my nostalgic vision? “Bonded by Blood” also did not come up with a comfortable dose of warmness, if I am not mistaken. Mortal Infinity are even more vehement than the majority of the hardly beatable pioneers without touching the outposts of death metal. Okay, sometimes the lead singer – pay attention to his fervent introduction of the fantastic 'Misanthropic Collapse' – rather growls than shouts his lines, but the basic element of In Cold Blood is razor-sharp thrash metal, no doubt about it. These guys pay tribute to the God of thrash and he forgives them the occasional use of keyboards, because they are far away from shaping the album. Instead, he smiles to rockets such as 'Devastator, Devastated' or the title track.

Mortal Infinity shoot their material with gigantic cannons into the (unfortunately only imaginary) crowd. One must be dead if one does not feel the enthusiasm, passion and idealism of the five guys who have released this material digitally on their own. It’s therefore a shame that their collection of killers obviously fell on deaf ears. F**k the industry, the independent labels and everybody else who did not sign these creators of pulse-quickening thrash. Equipped with an appropriate deal, this album would not revolutionize but, much better, revitalize the global thrash community from the bottom up. Believe me, if you have left the first 50 years of your life behind you, you need a reanimation from time to time. I speak from experience.

Another intriguing detail is that each and every riff of the slicing, ripping, shredding and cutting guitars sounds absolutely fresh. As far as I can see, there are no obvious influences of a specific thrash band that left its mark on the approach of the band. Nevertheless, pretty unexpected is that the guitars of 'Repulsive Messiah' or 'Silent Assassin (Champion of War)' sound like Bolt Thrower on thrash…. Anyway, Mortal Infinity can be compared with bands such as Dew-Scented in terms of fury, but they stand on their own feet. Moreover, it seems nobody can bring them down, not even the deaf-dumb-blind record companies. Maybe the world is simply unjust and pure, intense, furious and mind-bending thrash metal is the real new underground music. But if this is the case, be aware that Mortal Infinity are among the idealistic heroes of the underground. Even though two or three (good) pieces do not fulfil the highest expectation, there are not many options how to pen a better thrash album.