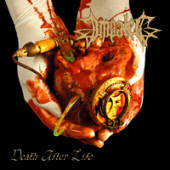 This has happened to all of you: You’re at a party or concert, talking to friends over drinks, when the “We Sound Just Like...” guy comes up to you. You’ve seen this guy before. Normally he has a curly mullet. He’s profoundly stupid, completely annoying, and is always wanting to talk about his shitty garage band. The nickname comes from how he describes their music: “You should hear my band!” he says, interrupting both your drink and conversation. “Check us out, We Sound Just Like Carcass! It’s fuckin’ SICK!”

You valiantly try to ignore this moron, but it’s already too late. The moment you made eye contact, you subjected yourself to a persistent barrage of “don’t you like Carcass? What about Dismember? We sound a lot like old Dismember, yeah, the early shit, yo. You should hear our demo, man! It’s fuckin’ SICK!”

Ah, so you know what I’m talking about. Here’s the relevance: Impaled are four of that guy. They sound exactly like early Carcass and old Dismember. They don’t even try to hide it. They’re playing recycled Carcass riffs like it’s a selling point. I can imagine them wandering around at parties, saying “dude, check out our band, we sound just like Exhumed!”

Therein lies the only noteworthy thing about this third-rate album: somehow, these Exhumed sound-alikes got themselves signed to a major label. Don’t ask me how. They’re indistinguishable from any number of better bands. Take a plagiarized gore act, add some anonymous death metal, interject awful fake sound samples, and write bad lyrics using words you found in Gray’s Anatomy.

Remember Impetigo? Impaled hope you don’t. Remember the first couple Carcass albums, back when this shtick was original? Impaled are banking on you being too young to note the similarities. Have you heard Exhumed? Then you’ve heard most of Impaled. A profound lack of originality is their most defining characteristic.

Even if you’ve never heard Carcass, Exhumed, or Dismember before, you won’t think much of this album. The production quality is miserable, like the old Impetigo tapes, despite a decade of technological advancement since The Horror of the Zombies. Someone should remind Impaled that it’s the 21st century. It’s okay to feature discernible guitars.

Now, assuming you can overcome the atrocious production and imitative style, there’s still the matter of musicianship. This is quite average, at best; playing sloppy and loose, Impaled rely on distortion and lousy production to cover up their inability to effect meaningful transitions. Lacking technical precision, they simply slough over from one riff into another. The songs aren’t terribly memorable, though certain riffs are well-executed. Occasionally, there’s a glimmer of genuine talent, but mostly their music drowns in a cesspool of mediocrity.

There’s exactly one saving grace to this album: finally, I know how to get rid of the “We Sound Just Like...” jackass. The next time someone approaches me about their “sick” death metal band, I’ll tell them “I’ve heard Impaled already, and you sound terrible. Never make music again.”