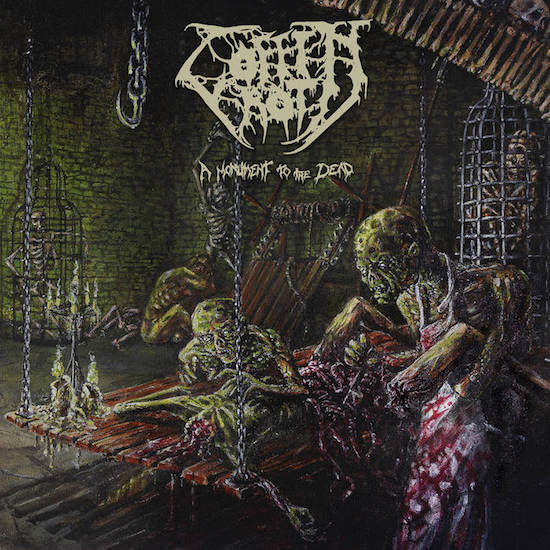 Coffin Rot have been around since 2017 and since their formation they have been actively putting out music in preparation for their debut which we now have in the form a A Monument to the Dead. This is fairly decent metal that most listeners by now would be accustomed to. Nothing out of the box or over the top, just well dug-up remnants of past-time pleasures; Exhumed, Possessed, Incantation and Obituary are among the first set of influences that rushed to me when listening to these songs that range from 2 to 7 minutes. Even though we've heard this kind of work before many times over, Coffin Rot makes it all appear so fresh; and to be honest, it never really hurts to revisit the past, unless the band leading the way is just not good. Glad to tell you that’s far from the reality where Coffin Rot's music is concerned. They play homage to some of the best that have held the shovel and they do so exceptionally well on A Monument to the Dead.

Straight out the dirt and coated with the odor of the funereal, A Monument to the Dead delivers accurate and hefty punches to the gut; with guitar hooks and leads sounding like they crawled from 1994’s death metal grave; vocals that gobble up all the air there is in the tomb plus riffing and drumming torn from the ‘how to death metal the respectful way’ book awaits. You get ‘Compremesis’, ‘Saw Blade Suicide’, Miasma of Barbarity’ and ‘Forced Self-Consumption’ among other libations to quench your thirst, and they do just about that. The music on here is old school ear-pillaging; song compartments are gathered in a way that each diverse element representing any period of the genre from 1990 - 1994 is made adhesive to the overall body of work.

The doomy incisions leading to those Incantation-esque, mid-ranges and tempos that veer-off into thrashing and grinding death metal terror reminiscent of Exhumed on their early and even later works, makes for a fine 32-minute outing. The guitar solos are worth mentioning also; some of its best moments are birthed on tracks like the aforementioned ‘Miasma of Barbarity’ and towards later installments, such being ‘Incubation of Madness’ and the 7-minute-long ‘Coffin Rot’. The drumming on A Monument to the Dead is also among the highlights; the sudden changes in pattern are top-notch and are sporty for a debut full length. The vocals do justice to the music and the era represented, they’re fairly deep and are accompanied by some level of clarity.

I think apart from an all-round stellar performance, what really stands out is the production, every instrumental note and vocal bellow can be heard with clarity, however there's no reason to be opposed to this because the music retains the quality and quiddity of the era and ages gone. I enjoyed all the songs on A Monument to the Dead, but my favorite is definitely ‘Coffin Rot’ which leads me to say, I prefer the more doomy and mid paced moments on the record that are elaborated on ‘Coffin Rot’; therefore, I believe in going forward with new material I think they should adopt the musicianship on the final track as their staple sound and approach. They’re much better in that territory and can really stand out if they choose to take on that formula. A Monument to the Dead is a good album but the potential to break away from the norm is certainly there.