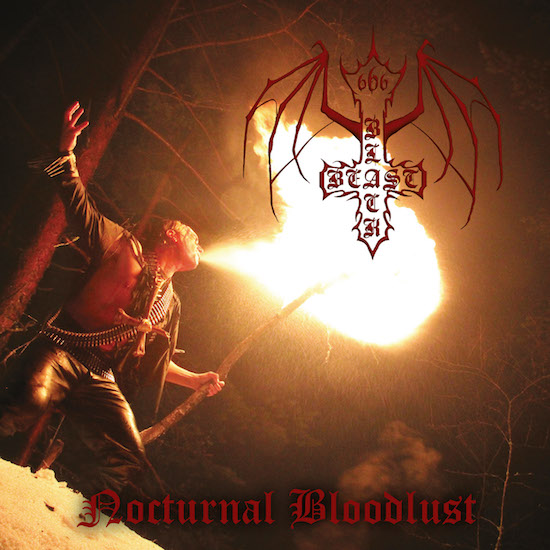 Black Beast is another formation from Finland. Black metal seems to be the Finnish antidote against suicide and the members of this band obviously love to be alive. Do not be fooled by the slightly rocking, almost misleading intro. Already the next track - the first regular one - bursts with vehemence out of the speakers, hyper-fast drums and flattening, violent guitars trigger pure hell while the vocals walk the fine line between human articulation and beastly screaming. This opener sets the course for the following pieces and believe me, the band members are not in the mood for jokes.

The group has a special history. It released its first EP 14 years ago, a split in 2006 and then... everything broke down for 13 years. This is probably the reason why the promo is not speaking of a long-awaited album, but of a LONG-awaited one. Please note the difference! I am almost happy that I did not get in contact with their first releases. Otherwise I could not have slept during the last 13 years because of the fear to be not the first one who gets the essential message about a new release of this combo. On a more serious note, I understand the intention of these promos, nevertheless, they are ridiculous.

Seriously speaking, Nocturnal Bloodlust does not need exalted promos, because it speaks for itself. Despite its stereotyped title, the album does not fall victim to stale ideas. Of course, the vocals of Infernal Tormentor Necrocorpse von Demonblood (shorter names were sold out) do not have an innovative touch, but his barking and nagging conveys an evil touch. Furthermore, the guitars create an infernal overall impression. The sound does not lack primitive recklessness and so the guitars appear as razors that inflict thousand wounds on the ear canals of the listener. To call this mix sterile would be the greatest lie of the year, it's exactly the opposite of sterility.

A profound love for the dark sides of human existence shimmers through every song of the album and even though there are fortunately no trumpets, the songs appear like fanfares that call for the final battle. Maybe it is true that the tracks focus a tad too much on sheer velocity and brutality. Sometimes great riffs break through the wall of noise, but they have to struggle in order to be heard and to reveal their full strength. But many albums from the Finnish pioneers, Behexen or Horna to name just two examples, have pointed in the same direction. So finally, as always, song-writing is key. Black Beast, this does not come as a surprise, shit on conventions. They do not seek their fortune in progressive patterns, but the creation of mind-boggling sonic whirlwinds reveals a profound grasp of the genre's requirements. And there is another remarkable detail. The fast sections downgrade albums like "Pure Holocaust" to the soundtrack of a funeral march of grief-stricken relatives. I salute the man behind the kit, if this drum work has been completely done by a human being. Either way, this celebration of ultra-velocity is almost painfully consistent.

At the end of the day, Black Beast are surely not the new brightly shining star at the Finnish black metal sky that overshadows the lights of its competitor. Nonetheless, they enrich the prolific scene of their home country in a really headstrong yet laudable way. In other words, 33 minutes are long enough for this kind of black metal, because a very narrow frame is set. But these 33 minutes truly provide diabolic pleasure. Thus, I am sorry to inform you that you should open your wallet one more time in order to get your copy or your collection of strong Finnish black metal will eternally suffer from incompleteness.