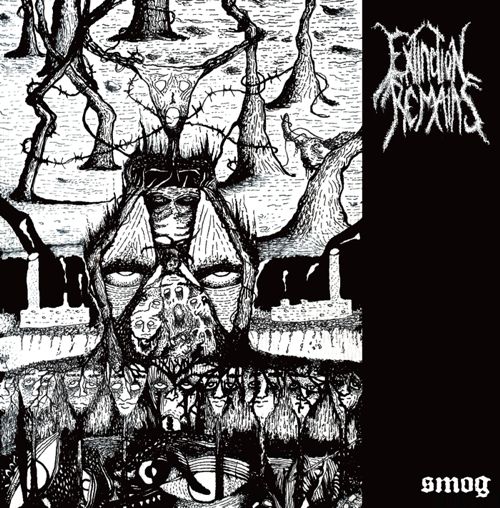 Whenever I think Brazil, I think thrash metal which they are predominantly known for. However, they seem to have a sizable death doom scene over there. One band representing the genre goes by the name of Extinction Remains and has released a compilation of material under the title Smog. Comprised of members Artur (Guitars), Arthur (vocals and bass), Caio (Guitars) and Mateus (drums), these lads play an effective style of death/doom metal fused with some crust, and damn! is it one hell of an impressive release. Smog gathers the bacterium released from 2013 through 2017 on the Ecologic Noise, Genetice of Defeat and Human Disaster Neverending EP's and demo; and I can assuredly say despite being a continent away and dwelling under the skies of thrash metal the guys responsible for this music are talented because Smog possesses the finesse to compete against some of the well-known bands here in the United States.

Starting out with 'Infested' and 'Under the Dome' Extinction Remains showcase top tier death doom metal worthy of sharing the space with some of the best within the genre. The movement between diverse segments shows consideration in song structure whereby the fills bridging the different sections feel connected as opposed to being just another set of musical lines added. Their crust metal parts are well incorporated into the mix and to some degree adds an air of surprise to the music. Sometimes you get the impression the band is about to delve into doom metal and totally do the opposite with fast thrashing punk metal edged beats being meshed with death metal licks as such can be heard on the track 'Sick Planet' and the title track 'Smog'.

Though being a compilation, I'm often lured to believe this is a full-length release, I guess that can be attributed to how well the songs flow and meld together. The consistency on Smog is of a high pedigree and that's saying a-lot considering the material is comprised of work through a 5-year span; hence the potential of the band's sound, technique and approach changing during that period is very high. What I did notice with regards to change in their music is that some tracks have a distinct higher quality of composition which in turn displays progressive improvement through the years. Another good facet indeed, as can be heard on 'Silent Spring' and 'Dunes of Despair', both taken from the Genetics of Defeat EP; in comparison to Ecologic Noise, the songs released on their 2016 follow up possess more definition as growls bellow deeper, riffs are given more space to work with, and the drumming has less of an impulsive feeling and more of a composed nature when transitioning the different territories.

It's great to see the booklet come with lyrics translated to English rather than leave it up to the listener and Google to butcher. They seem to touch on multiple subjects that I would need a whole other review to delve into, but I rather let the listener seek and find what the band is trying to convey through their tunes. 'Toxic Sludge' and 'Disaster' kind of give it away themselves with their rather candid titles and lyrics so for a head start you can see that the guys in Extinction Remains are more than aware of what has been transpiring for quite some time now on Earth particularly with the song 'Toxic Sludge'; it really does spell itself out, however on other songs like 'Silent Spring' and 'Malnourished' you will have to do a bit of digging to extract its core meaning. The intensity of the vocals and drive of the music behind it encapsulates the air of seriousness behind the topics, thus rewarding the listener with high levels of immersion. The music on Smog sounds like a process of deterioration occurring before your eyes, like lacing freshly cut steak with the venom of a komodo dragon then monitoring the progressive decomposition of the meat; that's what death doom can achieve if done right as these guys have. I hope Extinction Remains are given the credit they deserve and a chance to tour the states and share the stage with familiar names within the underground because they surely are passionate about this music. I hope a full length is in the making.