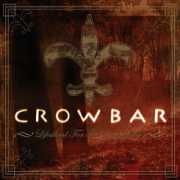 The Louisiana bayou has been the setting for one of America’s muddiest forms of music, sludge metal. Fusing the grooves of Black Sabbath with the herbish-aura of Kyuss, sludge metal took many forms in the early 1990’s. However, by the mid nineties, sludge metal was defined by three bands: Eyehategod, Down, and Crowbar. These three would forever be the embodiments of the sounds of the bayou.

Crowbar was last heard from four years ago when they released Sonic Excess In It’s Purest Form. Sonic Excess was not only a groundbreaking, but it also left a lot of room for growth. After listening to Sonic Excess, fans might have wondered what direction Crowbar’s next record would take. It could be a very slow album with singing, or aggressive as Dopesick by Eyehategod.

Crowbar took an evolutionary step in Life’s Blood For The Downtrodden, making an album similar to Sonic Excess but with subtle differences. The primary difference is the production. Producers Warren Riker (Down) and studio bassist Rex Brown (Pantera, Down, and Crowbar) brought out every instrument clearly, without losing the fundamental aspect of sludge metal: its muddiness. Another ideal addition to the studio lineup aside from Brown was Craig Nunenmacher (Black Label Society) on drums whose finesse and grace around the drum kit can be heard clearly on Life’s Blood for the Downtrodden.