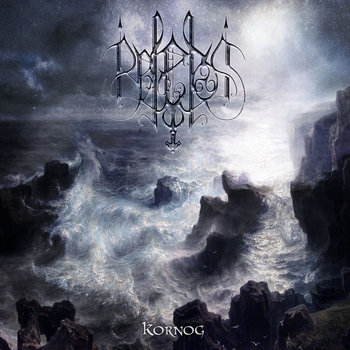 A perfect artwork, painted by a French artist of the 19th century, promises a heroic and elegiac album, full of great emotions and wild romance. I possess the third album of Belenos, but honestly speaking, I do not really remember its sound. It was therefore time to discover the music of the French one-man army anew. And believe me, I have already had worse ideas in my life. For example, I was so stupid that I really... well, let's change the subject.

Without any coquetry, I am not a specialist for this kind of Viking / Celtic black metal. This might be the reason why I am slightly surprised to experience that Belenos is not afraid of blast beats. They do not dominate the songs, but their integration alone is something that I did not expect. Among other things, these beats lend the album a death metal aura every now and then. The less aggressive parts remind me a little bit of bands such as Falkenbach or Geist, perhaps inter alia because of the maritime flair of these formations. Yet this is only a rough indication and the rather mellow sections are in the minority. The compositions of Belenos have definitely more metallic belligerence than those of Falkenbach. The earthy production must be mentioned at this point, because it delivers a certain degree of bone-dry brutality. Don't be fooled by the opening title track. It presents a pretty melodic composition which is imbued with dignity and clarity. The majority of the following tracks is not characterized by these traits. They put the emphasis on a harsher, darker and more violent approach.

Monsieur Cellier, the only artist under the banner of Belenos, has written songs that are neither totally incomprehensible nor repetitive. Nonetheless, sometimes it’s challenging for the listener to follow the ideas of the multi-instrumentalist. This challenge is not caused by confusing patterns. Cellier just presents a lot of different elements. His style of singing, for instance, varies constantly. A female voice and male "ooho-hoho" choirs are not missing as well. Inter alia due to these different vocals, the atmosphere of the album commutes between melancholy and fury.

I am undecided whether I should call this album overloaded, but I think it would be a mistake to go that far. However, it's a matter of fact that most tracks rather appear as a rugged coastline instead of distinguishing themselves with a smooth flow. I really like the metallic fundament of the album very much. Even a violin does not hurt the fundamental fury of "E donder ar mor". Unfortunately, this composition suffers from its heterogeneity - and the same applies for further tracks. I admit that I would also appreciate a small number of catchy sections. The opening title track provides evidence that their integration is possible without creating cheesy or commercial sounds. Indeed, if I had the opportunity, I would change a few breaks against some conventionally flowing lines, not only in view of the aforementioned track, but with regard to broad parts of the whole album.

My personal sensitivities aside, this album is made for those who love the entire spectrum of metal-compatible feelings. Unrelenting harshness meets sheer determination and almost sacral sections are not missing as well. The cocktail of death, black and Viking elements leads to a vortex of emotions in its best moments - and sometimes to slightly erratic results, but each and every song reveals the artistic obsession of Cellier. Those who like to have a big dinner should check this work, fans of fast food test the album at their own risk. Yet one thing is for sure: only dorks will say that this output has nothing to offer.