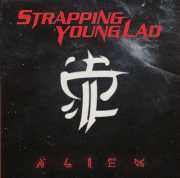 Strapping Young Lad is using Alien as their bid to be listed in all dictionaries as the primary definition for the word “heavy,” while frontman Devin Townsend humbly emits his talent like cannon-fire from the biggest goddamned intergalactic warship you’ve ever imagined.

Alien is perhaps the biggest madhouse of an album ever unleashed on the general public. Ironies are abound in each song, hammering out the genius of it all with intense speed, complete defiance of conventions, as well as cerebral roller-coasters of unique musical elements, song architecture and lyricism. The most gratifying aspect is that the music is smoothly cohesive, not sloppy or intentionally batshit like the work of John Zorn (Mr. Bungle, Naked City).

There can be no doubt that SYL has created an incredibly unique niche for themselves in the land of heavy metal superlatives: they are the best, the most intense, the most gifted and perhaps the most insane of all extreme metal bands without having to be a death, grind or black metal band.

Song after song, Alien will impress the living hell out of any metal fan. No one can create a wall of crushing sound like SYL; this is highly focused tachyon powered mayhem. Each piece is critical to the creation of the now classic SYL wall of sound: from the hyperblasted skins belonging to metal legend Gene Hoglan (Dark Angel, Death), to the crushing strings of Jed Simon and Byron Stroud and right down to the all out insanity from heavy metal super-freak Devin Townsend.

SYL is bound for a throne of incomprehensible power in the underground world of metal and no one is going to know what in the hell to do with them. As if to say, “by the way, we can do anything,” the Alien powerhouse leads listeners by the nose for seven songs then drops them into an electronic flavored acoustic lullaby called “Two Weeks,” that will give Pink Floyd’s Wish You Were Here a run for its money. Right afterward it’s back to business with more of the unpredictable superpower the band embodies.

As unpredictability normally goes, there’s usually a lack of catchiness. Not so with Alien. Each of the tracks has elements that will stick with you with much more ferocious tangibility than past SYL albums have been capable. Alien is easily the most accomplished and best SYL album to date, and as such will go down not only as an extreme heavy metal great, but a metal classic.