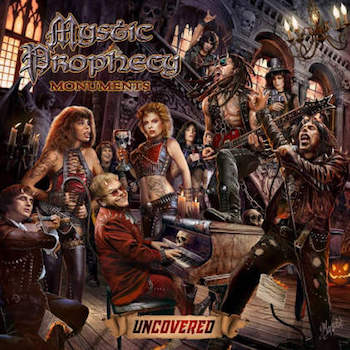 I always liked Mystic Prophecy. Of course, they had the most clichéd lyrics of all the current 142,592 bands recorded in M-A, but so what? They had the heart in the right place, a very good singer blessed with a strong voice and made pure metal flowing out of the speakers, sometimes good, sometimes so-so, but always authentic. And then came Monuments Uncovered.

First: the songs replayed here are in no way "monuments", at least not in the metal cosmos in which I like to stay. I also don't give a shit whether these are good pop songs (or occasional rock songs) or not. Because the artistic intention behind this record remains completely obscure. For a good reason - there shouldn't have been any, here it should have been only about the attempt to earn a few Euros with minimal effort. But then one could at least have expected Mystic Prophecy to have added their own touch somewhere here. Maybe that is the case in one or the other solo, but no title is changed in its basic structure, is presented in another tempo or has any moment of surprise to offer. Uninspired and like slaves of their own disorientation the quintet drags itself through one inanity after the other. Lead vocalist Liapakis doesn't come into his own at all in the poppy realms and thus the band robs itself of its strongest weapon.

Liapakis doesn't sound corny, but without any charisma. His unexpected complete lack of expression is the perfect partner to the powerless performance of the instrumental fraction. Of course, this Lenny Kravitz junk, for example, has a few percent more fire than 'Because the Night' or 'I'm Still Standing' and there would have been little objection to a single cover of 'Space Lord' on a regular album. But this whole work of art bristles with embarrassment. One look at the front painting is enough to know that there must have been a collective blackout here. A more childish picture you really only rarely get to see. But maybe I don't understand and the cover is supposed to be the ultimate humiliation of Kim Wilde, who was very pretty 35 years ago?

So don’t expect a metallic frame, these songs haven’t been pushed out of their comfort zone – and the same must be said about the musicians who fulfil the compulsory task without energy or conviction. Even the only acceptable track, 'Space Lord', sounds much more expressive, much more dynamic and much more casual in the original version. And even if I don't believe it and don't recognize it, maybe the originals somehow have a soul, a spirit or something else to like them for. Mystic Prophecy have successfully levelled all this with their uniformly unambitious recording of their versions. Wise guys may now point out that the production of these alleged monuments is fine after all. How ridiculous! A production can do the following things: 1. make a good record even better, 2. ruin an actually good record, 3. make a bad record even worse, but it can never make a shitty record good or leastwise bearable. Thus, it makes no sense to lose many words about the sound of Monuments Uncovered. Only for the record: the mix is okay, but it does not lend the songs the extra portion of pressure they would have benefitted from.

In short, this album is one of the most superfluous of all time. It has done exactly two things: it wasted raw materials and murdered the integrity of its protagonists. I don’t think it’s an album at all, just a betrayal. Mystic Prophecy, you can do it many times better.