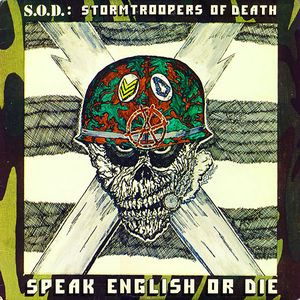 It’s the final day of 1985. A seventeen years old snotty head (me) wants to pick up his metal brother, because they intend to drive together to a New Year’s Eve party. By the way, it’s a pretty crude one with an enormous surplus of boys, but in the absence of better opportunities, they accept their destiny manfully. However, before they start, the “brother” presents his newest vinyl achievement: Speak English or Die.

A few minutes later we were sitting in front of the speakers and in my face was exactly the same crazy grin that the brother already had shown when welcoming me. Three letters hit me like hammer blows: S.O.D.! I had never heard of this acronym before, but already the name of the band sounded extremely brutal. These seemingly crazy dudes offered the most outrageous mix of hardcore, metal and political incorrectness ever. Of course, my school English was not good enough to understand the entire lyrics, but the few comprehensible lines indicated rather delicate issues, to say the least. Not to mention song titles such as 'Pre-Menstrual Princess Blues', 'Pussy Whipped' or (comparatively lame) 'Kill Yourself' (but despite its pretty trite title absolutely fanatic and outstanding). In short: today the release of an album with such shit-on-you-poetry would be the end of the career for each and every combo. Fascists, racists, misogynists, or simply assholes, this would be the harmless part of the reaction of the worldwide metal media. But back in 1985, the German RockHard magazine, traditionally located on the left side of the political spectrum, was of the opinion that the lyrics dealt with “interesting things”. Okay, rhymes with tits/shit/clits are surely “interesting”, no doubt at all. The same applies for “You’re just a poser douchbag, faggots, dickless, hacks… we’ll shove the spikes right up their holes”. So incredibly interesting! Yet due to whatever reason, even Ian Stuart, a well-established person of the mainstream business, never had to justify himself for this bullshit. The question is: why? How the hell could this happen?

…and the answer is that there are not many albums with a unique selling point, but Speak English or Die is one of them. Never before and never again one could discover such a perfect liaison of ultra-vehement yet unbelievably effective riffs ('Milano Mosh', 'Freddie Krueger', many more) and biting sarcasm. Better still: despite their brutality, each and every riff conveys a mischievous smile as well – and the lyrics are so blatantly antisocial that nobody with just one working brain cell could take them seriously. Not even a seventeen years old snotty head! From this follows that the full-length is one of the best entertainers the metal world has ever seen. I admit that my first thought was: 21 cuts in 29 minutes? This must be shit. And I was right – and totally wrong at the same time. Although everything is very basic and generic, the songs get the listener by the balls immediately. The guitar work deserves no other attribute than “excellent”. It provides the nearly not-improvable combination of ruthlessness and catchiness. Nine, no, ten out of ten riffs take the shortest way into the listener’s long-term memory. Once you have heard the (completely primitive) riffs of the first two tracks, you will never forget them again. Pure sonic gold!

And that’s just the beginning. S.O.D. also flaunt with inimitable choruses that keep sticking in the tortured brain immediately. The somersaulting 'Kill Yourself', the merciless 'Pussy Whipped' and in particular the stomping 'United Forces' must be highlighted here. Not to mention 'Douche Crew' with its catchy background vocals. Additionally, one finds songs that sound like the precursor of Nuclear Assault’s declaration of love to the Vatican (“Hang the Pope”). Of course, Dan Lilker, probably the biggest and hardest working noise-lover of all times, is the human link between these two legendary formations and his four strings mark a prominent factor here. His bass is not just there as well, it delivers some very cool moments. With the aesthetics of a weapon of mass destruction, the ironic aggression of S.O.D. unfolds and due to the outstanding, very powerful production, all instruments shine in full glory (by the way, how many snare drums were killed during the recording of the completely mad 'Milk'?). In addition, Milano’s voice also shapes the sound. He has this authentic loutishness one cannot buy and as if this were not enough, his totally sick princess-vocals in the verses of 'Pre-Menstrual Princess Blues' are the epitome of insanity. The lyrics of his later outputs proved that fat Billy’s political attitude and his general mindset are questionable, to express it politely. But let’s evaluate Speak English or Die without regarding later evolutions. It is furious as hell; it makes fun and even the miniature “songs” add value to it. For example, the two seconds of 'Diamonds and Rust (Extended Version)' will make you grin, grin or grin. Maybe it’s a less crooked grin than mine back in 1985, but these nuances are not crucial here.

You want to know the only problem of Speak English or Die? It was simply too good. Thus, this classic share the destiny of Terrorizer’s debut. These both big bangs left no room for further releases, because everything, absolutely everything was ultimately said and done with these two records. On the other hand, this means nothing else than both albums were perfect, because they embodied exactly what they were intended to be. Speak English or Die was this well-known once-in-a-lifetime record, even though it took a certain time to realize the perfection of the noisy song collection. (A very special form of perfection, indeed.) S.O.D. offered nothing less than the ultimate hardcore / metal bastard and they did it with a great sense of very… hm… “individual” humor (that wasn’t understood in Quebec, but that’s another story). My “brother” and I also needed a dose of pretty special humor in order to survive not only the party on New Year’s Eve 1985 (my personal Sargent “D” day), but also a bicycle accident on the way to it. In hindsight, I am sure it was no coincidence that I listened to S.O.D.’s debut exactly on this evening for the first time.