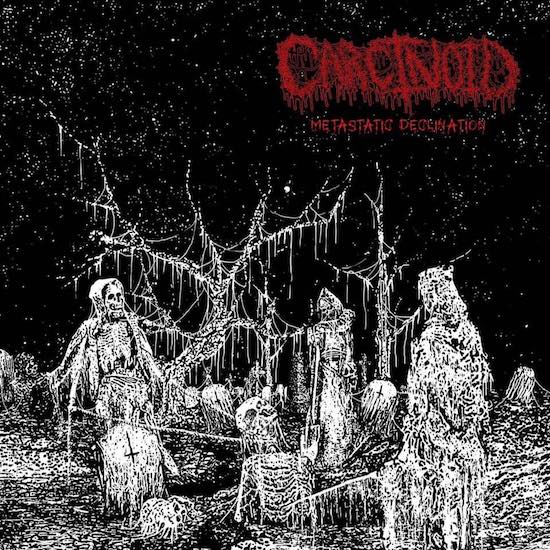 Not even a year has gone by since Carcinoid drowned the insurrectionist realms of death doom metal with their demo titled Carcinoid. That 3-track tumor lived up to all my expectations particularly when addressing what I look for in death/doom metal. It had only been a few days prior to writing this review I saw Carcinoid’s name show-up in The Metal Archives discord chat via someone mentioning them among other notable bands; I had wished to see a full-length record emerge soon and baby-baby-baby, to see this record appear so unannounced in my promo box was beyond surprising. On this occasion the Melbourne, Australia based 4 piece have returned with their latest diabolic secretion titled Metastatic Declination and damn does this malodor meet the nose violently.

Metastatic Declination has everything I loved about Carcinoid’s debut and more. The crushing raw production, the stomping guttural vocals, guitars and bass that have an elemental and true to the core aphoristic approach, aligned with drumming that shakes from the surface to the very bottom of the death doom metal terrain; this is the ideal follow-up to a praised predecessor. Also, this time the tracks are longer and are comprised of much more distinction and contrast in comparison to their short debut demo. There is much happening on Metastatic Declination, the production is more definitive but does not erase the rumbling and rugged bass, vocals seem to have undergone some modification in pitch and has more of a ton-lifting cavernous impact; the doom metal sections are just as good as on the previous release, however they are better balanced and are anchored by better progression; and the guitars are fucking catchy, thanks to some awesome lead and soloing work.

Does this record kick ass, from the incision ‘Sorrow’ makes down the slit to ‘Sickness’, Carcinoid truly can tap themselves on the shoulder given that the music here is precisely what I was expecting after such a brilliant debut. ‘Sorrow’ is an excellent beginning that succeeds the opening interlude ‘Dread’. Hitting with a recognizable hammer but also the magnified force of their ability, this song immediately hints at what’s to follow and goes on to display what development the band has undergone since their debut. ‘Ravenous Being’ sounds as the title suggests, like being tormented by an unforgiving threat of some kind; in this case that would be the disease afflicting the vessel. This track gives the listener the feeling something is trampling recklessly within the victimized, never exiting until its host has been completely depleted of all its energy. Sudden explosions of mid-tempoed punishment does the title of the song justice in portraying an image of panic, dread and despair that you would imagine to be symptomatic.

Metastasis has to do with the growth of cancerous cells in other parts of the body as a result of transmission through the blood vessels and what Metastatic Declination does is give the listener/s a picture of the stages the infected body undergoes; those stages being both mental and biological; at least that's the way I interpret the record. You think back to the introduction being ‘Dread’ then ‘Sorrow’ which underlines the worry the infected entity is burdened by as is usually accompanied by a recurring sense of the reality of impending death. The overwhelming seriousness of the songs giving brief documentation of these critical phases that in turn spell out the demise of the rapidly perishing organism, are well organized and fastened by both instrumentation and vocals that broadcast the mental and biological exacerbation. While convalescence is still a possibility that is often short lived, ‘Suffering Reborn’ appears to be constructed around the central idea of post-Chemotherapy, in which the cancerous cells once again emerge and redistribute itself throughout the organism’s body after some sense of relief begins to fade.

‘Sickness’ is self-explanatory for the most part and to me signifies a repetition of the decomposition cycle. Following ‘Suffering Reborn’, this song is just as strong as those before and closes the album off with a feeling of gradually building fear of reliving the process of cellular and bodily disintegration. Filled with multiple tempo variations by use of synchronized drumming, riffing and clogged throats, Metastatic Declination gives you an impression of monitoring malignant fungal growth taking its toll on and consuming a once thriving existence’s anatomy, now eroding hopelessly. Metastatic Declination is class act death/doom metal coming from a band existing in a region that has a very strong and thriving death metal. Metastatic Declination is an album that once people get their hands on, they will lap-up every second. This album has just made my top 10 metal records released for 2019 so-far and I hope Carcinoid continue within this vein of bringing real life issues to their recordings because they do a splendid job of it.