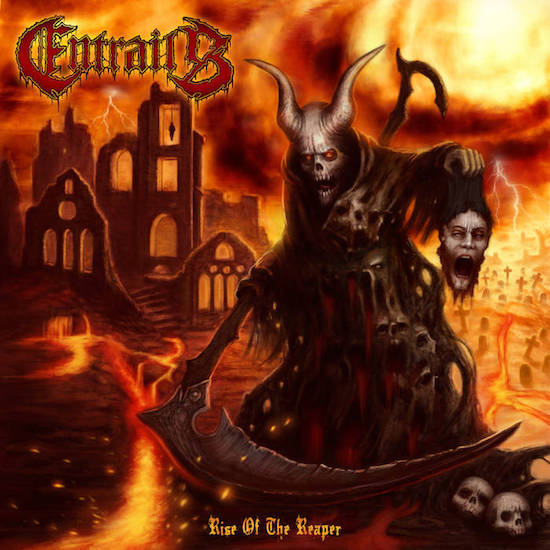 Buy on: Bandcamp
Type: Full-Length
Release Date: October 11th, 2019
Label: Metal Blade Records
Genre: Death
1 Rise Of The Reaper (Intro)
2 For Hell
3 Miscreation
4 The Pyre
5 In The Shape Of The Dead
6 Gravekeeper
7 Destination Death
8 Destruction
9 Crawl In Your Guts
10 For Whom The Head Rolls
11 Evils Of The Night
12 Cathedral Of Pain
13 The End (Outro)
MetalBite on YouTube
MetalBite on YouTube

Death metal is the genre where “more of the same” is simultaneously dogma, corporate principle and self-mutilation. Maybe the same can be said about other subgenres as well, but definitely not to this extent. I am familiar with the early works of Entrails and I really like some tracks of The Tomb Awaits. But when it comes to the songs on Rise of the Reaper – well, do they reflect total stagnation or absolute authenticity? As always, it lies in the eye of the beholder (or in the ear of the listener). Entrails integrate little morbid melodies from time to time ('Miscreation'), but their general approach relies on (pretty solid) riffs and guitar leads we – and especially true death aficionados – have heard many, many times before. Needless to say, that the grunting vocals are also fully aligned with the stylistic guidelines. Some will like them exactly for that, I rather grumble about their monotony and interchangeability.

The guitar work does not lack expressiveness and consequently the songs reach a certain level of quality. However, to enthuse convinced genre fans is one thing, to gain new ground requires other measures. Even the production does not show the smallest deviation, it satisfies the needs of the obvious target group, no more, no less. Rise of the Reaper is more or less flawlessly produced, but its subgenre conformity creates an almost sterile sound experience. The album sounds heavy, no doubt at all, and the guitar tone conveys the rotting stench of a million violently opened coffins. Songs like the nicely titled 'Crawl in Your Guts' with its somewhat groovy death ‘n’ roll approach can stand on their own feet, but unfortunately they get lost in the wave of more than 46 minutes of uniform music.

Finally, a probably daring thesis. Roughly 30 years ago, death metal was the most shocking music. The name of the genre was not just a category, but an alarm signal as well. Today its outputs in general and especially Rise of the Reaper suffer from predictability. This is nothing less than the completely opposite of a shock which usually likes to come surprisingly and suddenly. Seen from this perspective, we could almost discuss whether or not the subgenre has lost its right of existence. But I do not intend to throw the baby out with the bath water and at least the epic and dragging 'Cathedral of Pain' adds a slightly different aroma to the material. Some of its parts sound like Candlemass on a death metal trip. Anyway, love the album or hate it, I am unable to do either of them.