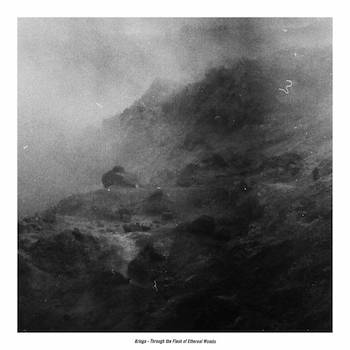 Austria is a very nice country in the heart of Europe with impressive mountains, beautiful lakes and, last but not least, excellent food. Nevertheless, some of its inhabitants seem to have a depressive attitude. Kringa's work reflects this state of mind. Misanthropy and aggression are further feelings that the musicians know very well. Be that as it may, Through the Flesh of Ethereal Wombs has been created by an ambitious band. Even though not everything is working yet, the musicians do not lack of potential and self-confidence.

"Pearly Gates, Abhorrent Ascent" is the most convincing example of Kringa's art. It seems that the band has borrowed the atmosphere of Pest's ultimate journey to death ("Dauðafærð"). Especially the surreal, fragile and bizarre guitar line at the beginning can cause goose bumps. The following stoic leads also remind me of the fatalistic approach of Pest's masterpiece and the accusing vocals complement the slow-moving guitars brilliantly. As soon as the guys accelerate the tempo, the lead singer delivers a more hysterical approach. That's no coincidence - the entire song shows a high number of changes. Fast parts occur, slightly sick "ohoohooho" gang vocals leave their traces and intelligently constructed breaks make this tune to an exciting experience from the beginning to the end. Indeed, this piece has a dark and depressive touch, but it does not lack of harshness as well. This is the kind of depression that I appreciate.

Unfortunately, one of the three songs are not flawlessly designed. The second track of the B side begins strong, but it suffers from a break at 3:30 that destroys its force immediately. It gets even worse. The following sequence delivers powerless, pretty boring guitars that want to find a place on the next (irrelevant) suicidal black metal album. The wailing lead singer seems to be full of negative feelings and to listen to his weltschmerz is anything but delightful. Finally, we have "Vibrant Walls", the longest of three excessive tracks. It presents the entire spectrum of bitterness, pain and sorrow. Brutal fragments and ponderous mid-tempo parts characterize the coherent song. Some of the fast sequences reveal that the snare drum has to struggle in order to be heard. Yet all in all, the sound of this 10" does not give reason for complaint.

Kringa have released a good, non-commercial EP which is crammed with profound, passionate, rather unorthodox black metal. I do not know why Austrians play exactly this extremely painful kind of metal in view of the beauty of their home country. However, I do not intend to solve this matter. The crucial thing is that the pulsating underground is full of interesting formations. Kringa is one of them.