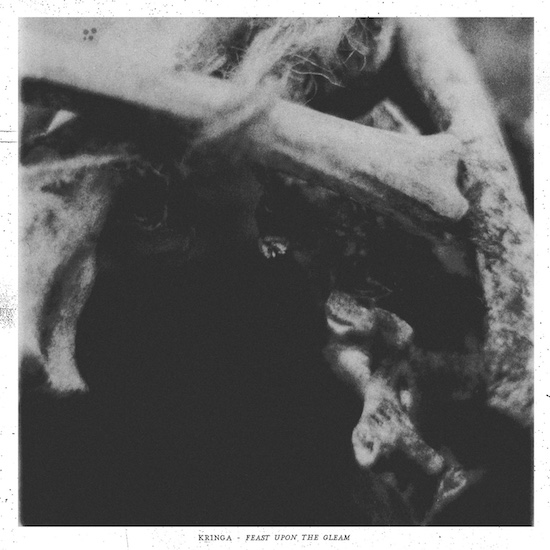 A menacing tremolo picking opens Kringa’s first full-length. The band from Austria is back and it still celebrates pretty unorthodox black metal. On the one hand the lead singer is far away from the typical nagging, growling or commanding presentation that thousands of other front men of the genre offer. He combines a shouting, almost punk-like approach with a desperate undertone and this way of proceeding alone ensures an individual appearance. On the other hand the music has absolutely nothing in common with the simple song patterns punk is well known for. The playtime of 45 minutes and the number of tracks (six) indicates the complexity of the material. Almost any form of conventional structure is frowned upon and there is absolutely no sense in watching out for verse-chorus-verse schemes.

Kringa put a lot of parts together in order to construct complex monuments, but they understand to do it in a clever way and without destroying the flow of the single pieces. Naturally this is no easy listening music, yet the songs also do not suffer from inaccessibility. The guitar work is mostly fantastic, either galloping ('Eroding Passage') or dangerous ('As Kaleidoscope Patterns Arise'). It escorts the lead singer who is able to convey different (but always dark) moods. His charisma further enhances the strong instrumental performance. Okay, in a few moments the songs sound like their own live version, for example during the last minute of the aforementioned 'Eroding Passage'. The track meanders aimlessly until its end. But maybe this is just the sonic portrayal of the eroding passage? It doesn’t matter. All songs impress with their variety which is never at the expense of sinister vehemence or black spirituality. Of course, the band is also able to integrate relatively melodic sequences, but their main function is to express melancholy, sadness and loneliness.

Feast Upon The Gleam can rely on more than solid production. Sometimes the snare drum vanishes in the background in view of the dominant guitars, but that’s not a huge problem. Five or ten percent more transparency would have been helpful. Nevertheless, the songs have enough power to create a stimulating black metal scenario. Kringa paint very bleak and simultaneously very expressive pictures that develop their own kind of fascination. There are only very few sections that forget to cast a spell on the listener. Given this situation, two things must be mentioned. The popular form of (mostly Finnish) black metal is a fantastic form of art and Kringa’s music has not much in common with this more or less globally dominating approach. Yet regardless of their different understanding of the subgenre, the Austrian dudes have released an inspiring and temperamental album that spreads the pure mentality of black metal in a sophisticated manner. As long as the guys are able to keep the balance between slightly experimental sounds and thundering sections, they definitely enrich the worldwide scene.