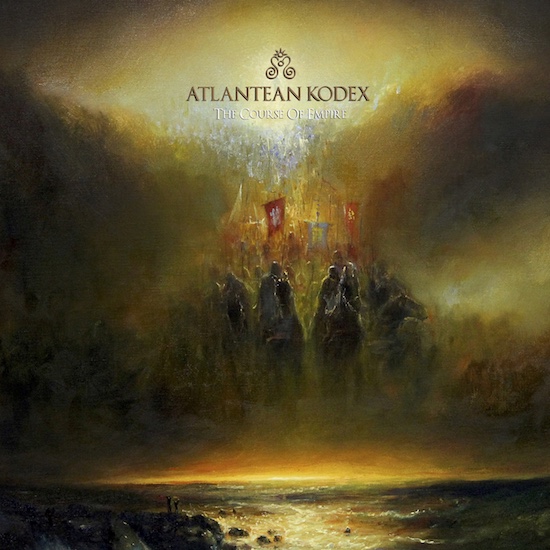 Type: Full-Length
Release Date: September 13th, 2019
Label: Ván Records
Genre: Doom, Epic, Heavy
1 The Alpha And The Occident (Rising From Atlantean Tombs)
2 People Of The Moon (Dawn Of Creation)
3 Lion Of Chaldea (The Heroes' Journey)
4 Chariots (Descending From Zagros)
5 The Innermost Light (Sensus Fidei)
6 A Secret Byzantium (Numbered As Sand And The Stars)
7 He Who Walks Behind The Years (Place Of Sounding Drums)
8 Spell Of The Western Sea (Among Wolves And Thieves)
9 The Course Of Empire (All Thrones In Earth And Heaven)
10 Die Welt Von Gestern (Abendland)
MetalBite on YouTube

Don’t judge a book by its cover, says the well-known proverb, but oh boy the common folk is wrong about this one. Beneath this extraordinary haunting piece of artwork by Mariusz Lewandowski hides an equally great musical masterpiece, a slight but very impressive step forward compared to the already fantastic The White Goddess of 2013.

So, Atlantean Kodex is back, six years after the album that allowed them to break through the underground scene and it with great joy that I discovered that they managed to further refine their sound to a point that The Course of Empire sounds the natural progress of a great band that carefully studied their next step and never overestimated their capabilities based on the hype that surrounded them. And a much-justified hype since all their releases are characterized by unparalleled quality both in regards to songwriting and the general presentation. Look at the double LP presentation, the inlay, the drawings, their lyrics, everything is top quality work.

Musically, not much has changed since their previous effort, but everything sounds better, the guitars sound thicker and more confident, the rhythm section is sturdy and pounding and the melodies and emotion are everywhere. They managed to present a huge wall of old-school yet very up-to-date sound that perfectly encapsulates the feeling of their unique songwriting. The epic doom metal of Solstice, Bathory (with hints and some easily recognizable nods to early Manowar) unravels in all its glory in a very ambitious album (both lyrically and aesthetically) in the 62 minutes of its duration. Markus Becker sounds even better this time around and the vocals are full of harmonies that further enhance his performance. There is a ton of emotion in every song and it is very interesting to see how the band manages to balance out the lyrical moments with the more primitive aspect of their songwriting, everything done tastefully and with a clear vision in mind. The album is slow, very heavy, dare I say ”darker” compared to anything the band has done so far, but there are hints of aggression here and there that make the overall experience easier to follow this time around and I believe this is where the evolution of the band is most apparent.

There are songs here like 'Chariots' with some fantastic clean guitar passages or 'People of the Moon' (or anything really) that all their “influences” would kill to include on their back catalogue and it is impressive how this band manages to incorporate those influences and filter them through their own characteristic sound. I believe the only flaw that one could argue is that the album is fairly long and the songs are 7+ minutes in their majority, but whoever spends his time listening to the album with a booklet in hand, will never notice how 62 minutes go by.

A true masterpiece, one of the albums that should create an army of new worshippers and along with Eternal Champion one of the 2 truly GREAT bands of traditional epic heavy metal. We are very lucky that such works see the light of day and are embraced by big labels and fans alike, as classic heavy metal really and urgently needs a new generation of heroes to look up to.