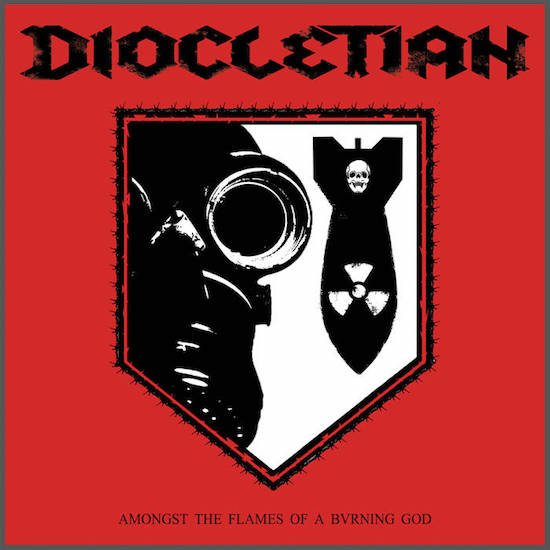 New Zealand war metal band Diocletian needs no introduction at this point, they are widely known as the flag bearers of the New Zealand extreme metal scene and their previous album Gesundrian was an excellent record, however that was 5 years ago and after some lineup shakeups the band returns with their fourth studio album Amongst the Flames of a Burning God and while the band has succeeded in keeping the relentless sonic violence of previous efforts, what was meant to be a return to the roots of their debut and a tribute to Tregenda of Black Witchery ends up being a disappointing retread.

First and foremost this album is not “bad”. The performances are excellent and the brutality and throttling speed that Diocletian are known for are still here. The lead vocals by Impurath of Black Witchery fame also contribute in pushing that extreme and crushing sound that only Diocletian can do; a punishing wall of pure chaotic sound and some truly demonic and wailing solos, courtesy of founder and only original member Atrociter and former Heresiarch member M.H., and a killer rhythm section from both bassist Rigel Walshe of Dawn of Azazel fame and drummer E. M., all members work in unison to make the best out of very short songs. They get in and get out while giving very meaty and complete performances on each and every song and on top of that the album is not completely devoid of some interesting ideas as shown in the opening notes of the final and best track "Restart Civilization", a somber and distant guitar riff that then leads to a unswerving final onslaught.

However, despite the excellent performances and outstanding displays of musical aggression this album is just that, a war metal record. More of the same we have heard before and no deviation of the norm, the blackened death metal riffs and grooves from Gesundrian have been completely dialed back and the bold combination of war metal and death-doom of War of All Against All is nowhere to be found. As I mentioned before the band sought to do a traditional war metal album akin to their debut, a respectable approach for sure but the execution leaves a lot to be desired. What truly disappoints for this album is how standard it feels, it’s another war metal record that in spite of being so aggressive and dissonant comes off as impressively safe, there’s no bold experimenting, no unique twists, you get what you get and that’s about it and at 25 minutes the album just ends and you end up wanting more and not in a good way.

Overall Amongst the Flames of a Burning God while not a bad album and with genuinely outstanding performances falls incredibly short for a band as well regarded as Diocletian. You can certainly do worse in the genre, but for Diocletian to put an album this average is very disappointing and it makes me fear that Gesundrian was the last time we heard Diocletian truly standing out among their peers and have already in their fourth record fallen into monotony. Not the worst but regrettably not the best. In conclusion the album is basically a Revenge record with the vocals of Black Witchery, some people might love that, but I truly expected more from this band.