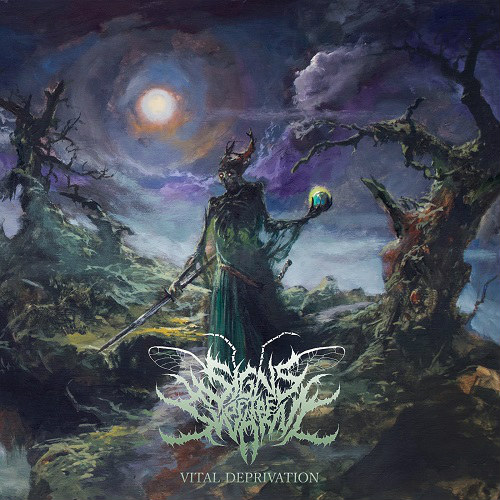 I used to hate this band a lot, but lately I've been getting even more into deathcore, specifically all the bands I used to despise in the genre. One of those bands being Signs of the Swarm. The first two albums I now really like, but I didn't really find myself enjoying Vital Depravation as much as I did the first two, not much at all.

I mean yeah, it still has all the heaviness and nastiness as their old stuff did. Pretty solid for the most part. But aside from those main parts it's not really all that amazing or a straight jam for me. The songs are composed pretty good, but some little parts added in ruin them for me.

Most songs have a part that has some areas that feature the side snare that's blasting. While you hear that part, you hear a little compression or un-processing on it. I don't exactly know how to explain it, but if you listen to the album you'll know exactly what I'm talking about. Another thing I don’t like is that it can be brutal and normal but then it gets instantly soft, or interlude-y or whatever the fuck else. This album definitely does have your heavy average modern deathcore, but all the little parts sprinkled throughout the album makes it less enjoyable. The interlude parts and little other things would be better if they were less often, or not even there at all for the most part. I guess you could say this is their experimental album, because it's pretty new and odd compared to previous releases.

So pretty much my only issue on this album is the side (different) snare parts, and the suddenly soft or "interlude-ish" parts during the songs. It's unnecessary and a little unpleasant. Other than those issues this album is pretty decent. It's not a banger or anything awesome at all, but it does have the heaviness that's expected. I really enjoyed the instrumental track "Undying Fidelity", I thought that was very good.

Their first two albums are way better than this one. Vital Depravation is just alright, but the first two records will always remain superior, especially The Disfigurement of Existence, that's their best.