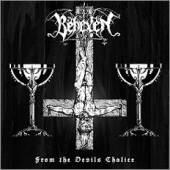 Friends of black metal from Suomi or, more generally speaking, supporters of good music can confirm that Behexen are not known for soft harmonies, but here they deliver their masterpiece in terms of raw brutality. The noisy production gives the six tracks an almost unbelievable portion of fiery destructiveness and impenetrable darkness. Although I wish I had the vinyl edition of this monster, I also like the CD, because the fact that the songs are not isolated strengthens the monolithic aura of the material. These 30 minutes and 28 seconds of pure violence lead directly to perdition. Wonderful!

I cannot say that I need a double album with this exclusively murderous, voluntarily limited approach, but half an hour of this utterly bestial black metal appears to me as a good format. How many drugs were necessary to reach this state of ecstasy? Due to an absolutely hateful mood, Behexen puke on the altar, on the cross and on the offertory. Yes, they work meticulously. But it's not so easy for me to do my own work appropriately. I cannot speak about details, because it's all just a gigantic lump of bloody meat that the Scandinavian heralds of the downfall throw into the audience. The group always celebrates a very special form of merciless aggression, but here the dudes reach a level which is second to none, a paradise for noise fetishists. And they keep this level during the entire playtime while spawning colossal monsters such as "Canto IV - Void...". Don't think it could be possible to identify significant differences between the single songs. The horror goes on and on and even the sacral intro of "Canto III - From the Devil's Chalice" does not bode well. Indeed, the song turns out to another hailstorm of musical barbarism. These dudes don't do things by halves.

The bone-chilling guitar sound makes it impossible to find the slightest elements of beauty. The band simply batters everything. Sometimes they are at risk to lose dynamic, because the lack of diversity leads to a nearly one-dimensional overall impression. No doubt, it's a pure sonic rape for everyone who is not used to listen to extreme music. But Behexen belong to the spearhead of black metal, not only in terms of Finland, but on a global scope. This means that they are able to intersperse a few characteristic guitar lines into the self-made inferno. Therefore, one has to listen very closely, but there is a minimum of variation. I realized it two seconds before the album made me deaf. Fortunately, my recovery is in progress... However, the diabolic voice, the devastating drums and the hellish guitars shape the material and make clear that this band is not interested in shaky compromises. Definitely not. So, I do not want to lose my hearing again and I also do not know what to say anymore. It's just a special experience to listen to these apocalyptic outbursts. I always enjoy the songs and afterwards, I must confess that I enjoy the peaceful silence as well.