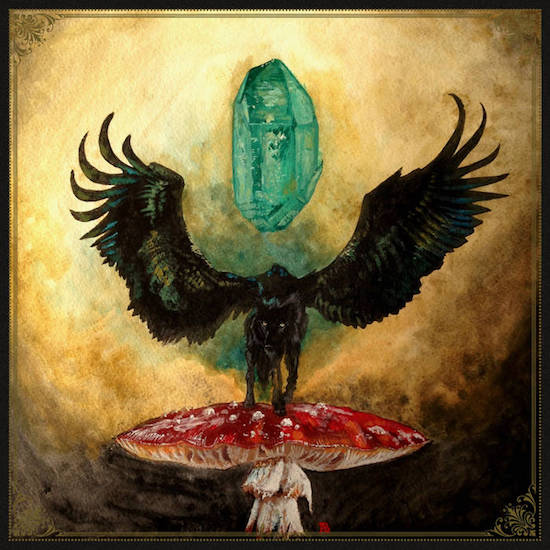 Out of recommendation I found Jade, a band sharing members across Germany and Spain playing atmospheric death metal. Originally released as an independent effort in 2018, Smoking Mirror went undiscovered like a gem tucked away beneath the earth; now with the aid of Pulverised Records, a cd reissue is set to give Jade’s debut recording the recognition it deserves. From what I was able to gather through the promotional text and my own research, ‘Jade’, was a mineral of great value and rarity existing at the time of and throughout the ancient world, more specifically, among other purposes, it was used to craft weapons due to the toughness of its physical properties. This information came after I had already listened to Smoking Mirror, thus I was all the more intrigued, hence, my initial impression of the record signaled an abstruse relationship between music and significance. Playing to the tune of mystery is the enigma surrounding the identities of the band members involved, making Smoking Mirror an ever more precious record.

Atmospheric death/doom metal holds the potential to go utterly wrong and by ‘wrong’, I mean land on the not so desirable side of death metal if not handled meticulously. Too much or not enough of this or that could see the music sliding down a trap-hole leading towards a record lacking the essence of what encompasses a sincere death metal album. Jade plays their hand well in this tedious task, balancing the weights of atmosphere against that of the genre. Smoking Mirror opens with ‘Jade Emperor’ which I think is a reference to Chinese culture, that placed the gem in the tombs of Shang Kings, given ‘Jade’ was thought of as being an “Imperial” gemstone. The lyrics to ‘Jade Emperor’ even appear to reference the gem's use as an anti-aging agent/element; a belief that has survived many centuries and exists till now. This song applies the fundamentals of death metal first before the atmospheric covering truly begins to take effect; thus, said the ambiance grows in potency, slowly creeping towards it’s engulfing climax.

The music on Smoking Mirror is genuinely death metal, the soaring growls, riffs and drumming align gracefully making under the tense, shadowy tenor. Each new song seems to up the atmospheric extremity, ‘Jade Emperor’s', builds from the somewhat calm yet ominous feeling, to a state of abject hatred and fury heading into ‘Dead Stone Mask’ and my favorite track off Smoking Mirror, ‘Blossom’. The final track being the self-titled, plays with an array of illusions as though seeing reflections alien to that of your physical self, rather, representations of the evil hiding behind your lying makeup. Though through the lyrics of the song we see its more rooted in ancient culture, I think it also speaks to the conflicting personalities of mankind’s nature. Smoking Mirror is an excellent record that offers only a morsel of what Jade may bring as time progresses, musically on 22 minutes, but message-wise, a lifetime of wisdom and more than what meets common perceptions.