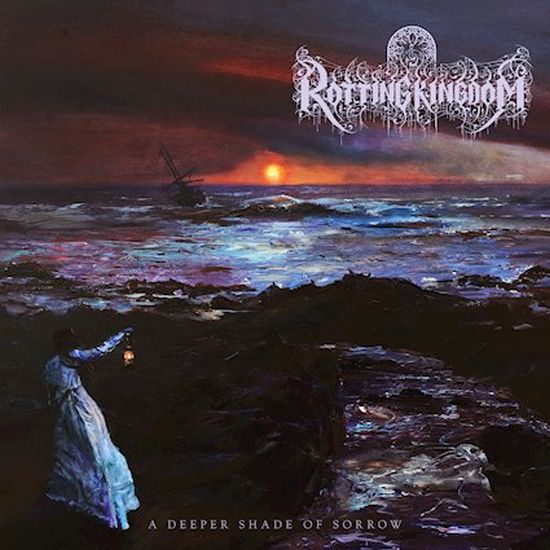 Rotting Kingdom independently put out a 3 track EP self-titled Rotting Kingdom in 2017, that once heard, felt as though one was being caped by the soundscapes the band produced. It sprouted a chapter of wonder and alarm though within the band's infant steps unto the massive fields of the genre. With just one listen you could tell Rotting Kingdom had been called to do justice unto the genre. Some years since the EP was released has gone-by, and on the winds of the past was rode the expectation of continuation. The foundation had already been laid by the quintet, thus said, it would only seem right they began the process of building upon such. Their sorrowful sirens rippling through the hemisphere of death/doom is now awoken again making landfall with the latest and easily the best output by Rotting Kingdom, A Deeper Shade of Sorrow. With a comforting improvement and transition towards multi-elemental songwriting, this harvest of rot is the bands most musically compelling yield. Two years spent gardening and putting the definitive touches and implementations to their music has been rewarding where A Deeper Shade of Sorrow is concerned. The impact of their debut EP has been magnified to such scale that the music here towers threateningly in demolishing pose above their past oeuvre.

Taken from the photographic angle of an American death metal manghir, then continuously remolded to situate itself within the Finnish death/doom metal demesne of bitter sadness, the transmogrified 'Barren Harvest' is what I'd say is the best song in Rotting Kingdom's discography. Possessing a range of grabbing emotional content in its 7-minute duration, this track alone is worth getting A Deeper Shade of Sorrow. You sense a band on the verge of evolution as you progress through the bold steps it takes towards landmark-esque branches within the genre of death/doom metal; the quintet makes it clear to all, they are not afraid to tackle the traditional regions of the genre. In-turn, this bravery and effectiveness of wrapping together melodic death/doom with the traditional fabric of death metal, mirrors a band certain of their identity and ability. It was indeed a well-received surprise considering A Deeper Shade of Sorrow appeared to be tracing the artistry of their debut judging by the album opener, 'Sculpted Into Life By The Hand Of Death' which keyed-in the compositional facets of Rotting Kingdom's music. Those burdensome, yet goring vocals of frontman Anton Escobar combined with the three way tag team of Chuck (bass), Clay (Guitars), Kyle (Guitars) and the heartfelt hammering of Brandon mapped out a detailed near perfect debut of a full length not only providing a clear musical temperature, but enforced but a road map of what other elements would soon become fundamentals of Rotting Kingdom's music.

The guitaring is something-else on A Deeper Shade of Sorrow, they represent the album title with engraved showings of despondency and despair heard on aforementioned 'Sculpted into Life by the Hand of Death' and the explosive 'Barren Harvest', but sustains the urbane motion through weeping to overpowering passages heard on the black metal fueled 'Absolute Ruin'. The string-work feel exacting and extract of the artwork thus bringing the atmosphere to life even on the mysteriously eerie yet progressively bluesy closing segment of 'The Antechambers of Eternity'. Rotting Kingdom dug deep within themselves to weave a profound album that many inquisitive ears will love once they get the chance to own and experience. A Deeper Shade of Sorrow is as the title suggests by means of improvements made to embolden and empower their music; however, proceeds to demonstrate diligent song writing development, whereby Rotting Kingdom as a band can breathe freely and not tie themselves to the limitations of a style or format. A Deeper Shade of Sorrow is the polishing of antiquity to glisten with crystalline reflection.