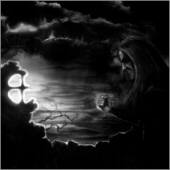 A few days ago, I read the following statement: "true greatness of the split recording lies not in the simple addition of two bands of mutual respect and admiration, but much more so in the ability to merge those qualities into something that truly stands on its own merits". Well, I am no expert for "true greatness", but sometimes I can identify true nonsense very quickly and this quote falls exactly in this category. So, it makes more sense to speak about the content of the here selected album than to lose many words about its format.

Behexen's songs profit from a better sound than those of Horna and so I begin with the contribution of the spiritual fathers of immortal classics such as "Fist of the Satanist". Too bad that their three songs with a remarkable duration of nearly 22 minutes cannot compete with giants like the aforementioned song from "By the Blessing of Satan". The dudes present the typical approach and the results are convincing, no more, no less. The tempo changes ensure an acceptable degree of dynamic, some icy guitar lines show up and the rumbling overall approach explains the general view of the band on black metal in a matter of minutes. "Beyond the Shadow of My Lord" is a little bit too long, but it houses some very dark instrumental parts, full of power, strength and hellish flair. Not to mention the opening riff of "A Distant Call from Darkness". It carries the group through the entire song and shows that Behexen are probably the most competent black metal force from Suomi. (77%).

The contribution of Horna seems to be recorded underwater, in a stinking bin or in a sound studio without functioning microphones. Everything sounds dull, flat and blurred. This affects the impact of the compositions inevitably. Their sinister scenarios remain vapid and, to be honest, the riffing also does not reveal overwhelming skills. Albums like "A Blaze in the Northern Sky" or "Under a Funeral Moon" have already been written and therefore I have to question the motivation of Horna to publish similar tunes in a similar sound. However, if one can't get enough of raw black metal in a low budget frame, feel free to enjoy Horna's four pieces on this split. Yet in my humble opinion, they have much better tunes (55%).

In a nutshell, it's a partially strong split, but "true greatness" is missing here. Both formations show their solidarity with the real underground, to express it in a positive way. That indicates a laudable mentality, but it does not make the songs themselves more valuable. So, check out whether or not it makes sense for you to become familiar with this work.