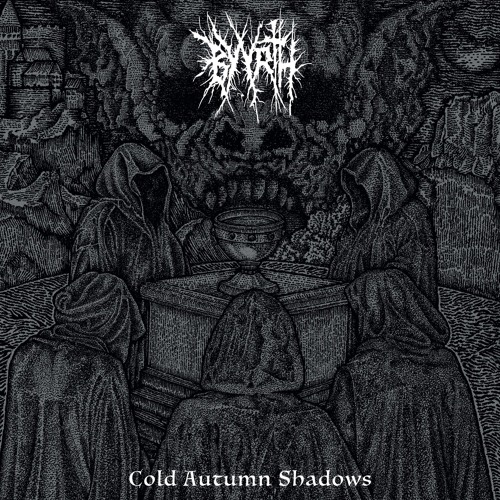 If you don’t mind mixing punk rock influences into your black metal then Byyrth’s 2019 EP Cold Autumn Shadows might be the record for you. Birthed in the United States, well...., Byyrth, emerged in 2016 with a demo which was then followed by 2 full length releases. The first being Saviors of Armageddon and Echoes from the Seven Cave of Blood; both of which received favorable reception upon availability. Their music on those 2 releases could be generally classed as a blend of raw, first and second wave back metal that leaned more toward the latter. A certain level of grooviness could be heard in their music along with heavy metal and rock influences. These elements gave Byyrth their own sound and painted an image that allowed them to stand out amongst the humongous raw black metal niche. Cold Autumn Shadows offers more of the same but more conspicuously done; in addition, you could say the production is also clearer on this lap.

These bats generally sing about occultism, death and vampirism among other topics generally represented in the black metal scene, but their delivery is not quite the typical. Yes, the rawish production can be pointed out along with the loud screeching vocals that sound like they’re being fed through a television displaying static, but it's the way in which Byyrth puts together their compositions that makes each song stand on its own. What would usually begin on one note, whether it be 1st or 2nd wave black metal or even punk rock/doom, usually at some point along the line begins to open its arms welcomingly to incorporate a multitude of other elements. You can hear this on ‘Infernal Abomination’, ‘Cold Autumn Shades’ ‘Parasitic Twin’ and ‘Archaic Triumviate’ that either begin leaning on the side of punk rock or black metal then does a sort of magnetic blend as the tunes progress.

Amidst the healthy variation is an overtone of melancholy that stretches throughout the playtime of Cold Autumn Shadows. Sort of menacing sometimes as it changes the shade or tone, especially given how much punk rock is utilized on most songs; hence the sorrow comes off as being ominous as if a bright blue sky slowly begins to turn grey and gather dark clouds like Summer making way for Autumn. Think that's a truly notable aspect about Byyrth’s music on Cold Autumn Shadows, their ability to fluently weave through their compositions and modify the character each exudes without sounding in-cohesive or rushed. After listening to Cold Autumn Shadows I can say that's what I admire the most about Byyrth, is that just when you get too comfortable with whatever direction the music is heading, without warning, they pull you off that path and onto another that is just as good or better.

In comparison to Byyrth’s previous efforts, I think Cold Autumn Shadows is a greater representation of the band and how they truly intended to sound in my opinion; they're still raw to some degree hence the toned down "noise", but more detail is made available in their music with this production that I would imagine was used in regards to the punk rock mannerism. Supporters of Byyrth’s older material need not worry, Cold Autumn Shadows is just as strong if not stronger and is worth standing beside Echoes from the Seven Cave of Blood and Saviors of Armageddon. Thus said, I think going forward we will get more of this sort of production and musical approach for future installments into their blood drenched catalogue, or maybe we won't; perhaps Byrrth does something entirely unpredictable and still manages to gain approval; such remains to be seen. For now, enjoy the sounds of the darkness set in as the night season gains dominance over the earth.