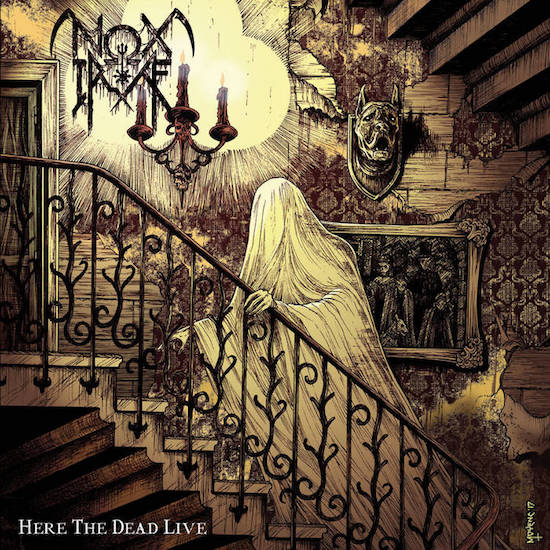 It’s fair to assume the worst when new records by newly formed bands come with the usual FFO, insert legendary band name. Seen it result in underwhelm and failure many times over, but cast your worst fears aside regarding Nox Irae's debut Here the Dead Live, which is a collective comprised of members once involved in Catacomb and Affliction Gate, both of which have released very good records at their time of being active. Now by forming a new bloodline under Transcending Obscurity's watch their debut EP brings a true spirit of antiquity and lives up to the hype references.

I found immediate enjoyment through the opening on 'Phantom Parasite Trauma', it gives you a reason to stick around; fast drumming, confident soloing and vocals that sound like actual death metal ones, not grunts I hear so many vocalists in new Swedish styled death metal bands doing. It's a great song starting out strong and finishing on a climax; you'll also hear the Bolt Thrower in Herastratos' (Affliction Gate) voice almost giving goosebumps at times in being so identical to Karl Willets' and the Deicide in voice and lyrical pattern. That thick, suffocating production Bolt Thrower are known for can be heard too, as a combo they provide macho to Here the Dead Live. Fred's (Catacomb) a maniac on the guitars, takes charge of the music most times and always contributes something of high value to the songs. Most memorable is his guitaring on 'Phantom Parasite Trauma', 'Cold Wind' and 'Supposed Dead'. Those tracks take what would seem normal from and angle and transform them to pieces I've had on repeat for hours.

Here the Dead Live is predominantly death metal but there's thrash metal to be heard on 'Knife Under Throat' (which has a groovy breakdown reminiscent of something I've heard off Temple of Void's "Lords of Death" album) and 'All is Over'- (perhaps my least favorite song in comparison to the rest of the entries), yet still Fred's guitar work remains untouched. The drumming is not without Jérôme Casseri's (Catacomb) magic touch; hard precise hitting, interesting transitions and great pacing to tighten and buckle Nox Irae's follow up to their demo. 'Supposed Dead' is one kick ass track compliments of Fred's solo guitar work, the riffs on there top all others on the album; total dominance coming in the form of catchy licks dispersed throughout the near 5-minute tempo changing, atmospheric master class of a song. Therefore, it should come as no surprise if Nox Irae decide to use that pattern for future releases seeing how refreshing the music was and how well it brought the record to a close. All this is topped off with eye catching cover artwork by Chris Moyen; hence you get a complete package displaying excellence on all fronts.

Nox Irae sound like one of the more promising death metal bands (no surprise there), Here the Dead Live is a fabulous EP that would tickle anyone who likes this kind of death metal.