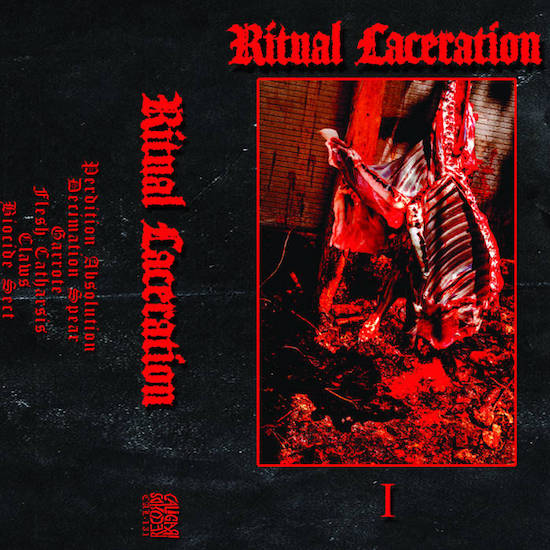 Ever awoke starved to fuck, hungry and looking for anything to sink your teeth into but end up finding nothing but a half-filled glass of water? That's how agonizing and pissed off this demo by Ritual Laceration is. I don’t know who the member/s are and who's involved with this band/project, but I can assure you, this demo rips!. This is on the bassier side of the bestial/black/death metal spectrum, given the band uses two bassists, which I think is cool because it strengthens the crunch with a meaty barbaric tone. The noise can be heard but is mostly grouped by the macho of the bass-lines; hence, Ritual Laceration has their own sound to say and can be identified in this sea of creatures. The music here is like watching what starts off as an aggressive play with an animal or any human being, then slowly devolve into vicious and lewd acts of perversion and punishment. This 11-minute demonstration is an absolutely pulverizing display of brutality in its most primal practice.

Just by reading the album titles I knew the stuff on I was going to be condemningly hideous. You have this massive wall of trauma and mutilation being built rod by rod with songs like ‘Decimation Spear’, ‘Garrote’, ‘Biocide Sect’ and ‘Claws’; just what the fuck kind of ugly shit is this?, truly bestial and pitiless. This one snatches the panties clean off any stuck-up twat and delivers powerful vaginal stomps devoid of any love making caress; empty of any class whatsoever, heartless beyond imagination and bursting with sweeping fury, I is a record crafted for the undeveloped and untainted in nature by the curse of civilization. The lacerations on here are primal and lack any remorse; if you were waiting to be cuddled you came to the wrong place; what’s on I will fuck you up inside out.

I’m very keen to hear what else is in store for this band/project in hopes for something being released sometime soon and hope Ritual Laceration is well in the works or even complete at this point. I really can’t recommend any tracks to help you ‘get into’ I because there are no tame moments. To appreciate this, you would have to have been baptized by the sonic severity of Revenge, early Archgoat, Kapala, Intolitarian etc because there is nothing on I that is lukewarm or approachable. Can't claim to like bestial metal and pass this up, last time I checked it was only available on cassette limited to 150 copies through Caligari Records and is probably sold out by now, but you can still get it digitally (I prefer physical). It would be great to see this released on 7’’ sometime soon; what I really want is a full length about 25 minutes long that utilizes this same production, however as for now I will suffice.

I think I've given enough hyperbolic descriptions of what exists on I but for those of you still not getting the picture; imagine if your petite, virgin, consenting-sister was locked in a steel cage with Mandingo, Byron Long and Lexington Steel, and all she had on was ‘an itsy bitsy teenie weenie yellow polka dot bikini’.