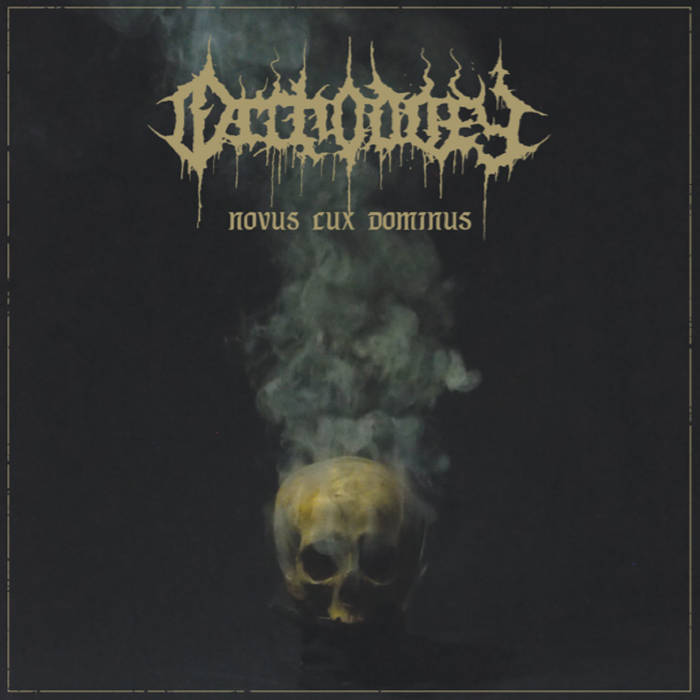 Prowling black/death/doom metal from Orthodoxy comes in the form Novus Lux Dominus. Hailing from Spain, the quartet craft their first full length album after a mere demo offering that takes a giant leap into the occult DM realm. One could say this album is precisely that, but there are more than the traditional howls, grunts, hammering and riffs active on Novus Lux Dominus. More noticeable are the doom and black metal interventions, a play-foulness between technicality and chaos whilst the atmosphere changes ever so subtle and sporadically. An album that is structured with familiarity but also possesses moments of swift transitions into melodious and trance inducing death doom territory.

They twist, turn and shake the 'Key To Victory' and the door opens, revealing all instrumental transgressions, the blasting noise takes a nosedive into screeching guitar solos and the company of death doom, with crawling mobility it reshapes the aura of the album before reverting to its former self. And there is no lack of soloing input to direct the entry and support the overall album. You'll find this jump-about occurring on most songs which is a strength that Orthodoxy seamlessly put to work and exploit for the better, thus giving the record an early identity. 'Flame Of Primordial Essence' and title track 'Novus Lux Dominus' reinforce the strategy, catching the listener off guard many times during the first or even a following session with this calculated effect. The way the material goes from pounding aggression in blast beat bliss to carving out a cavity of slow, slithering advances, appears so seamless that you forget the primary genre of the material Orthodoxy create.

'Eerie Presence' binds the material excellently adding an obscure ambient overcast to the soundscape of Novus Lux Dominus that introduces 'Voluptuous Death' and 'Abyss Of Aberration'. And it must be noted that the interludes here are applied to considerable effect as they don't just aid the atmosphere of the record, they also act as excellent segues into any particular track and they offer a neat organization of the music and overall presentation of Novus Lux Dominus. Everything sounds completely fleshed-out and precisely pieced together hence you get the feeling you are listening to a renditioned concept rather than random noises.

There is enough quality material on Novus Lux Dominus to go for at least another 3 years, so there should be no rush to put out more music under the Orthodoxy banner. This album is a good beginning that greases the gears for progression where the music is concerned hence it will be interesting as to how a second entry is handled.